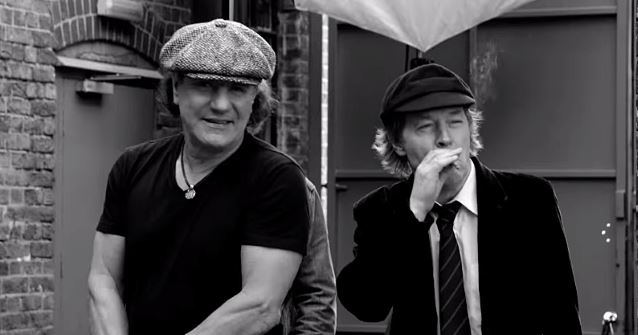 AC/DC: Go Behind The Scenes Of Photo Shoot

As previously reported, the average price for tickets to AC/DC's upcoming North American tour on the secondary market is around $255, according to Forbes.com. The most expensive show of the 13-date run is a September 20 gig in Edmonton, Alberta, Canada, where the average secondary price is 124 percent more than the tour average at $573. A Vancouver show on September 22 is averaging $561, while a stop in Massachusetts on August 22 is the cheapest show on the tour, with an average price of $206.

Forbes.com collected these figures through TiqIQ, a search engine that scans the listings of online ticket resellers.

AC/DC's "Black Ice" world tour, which included 168 shows between 2008 and 2010, grossed more than $441 million and was the fourth highest-grossing tour of all time.

The group, which is supporting its recently released 16th studio album, "Rock Or Bust", starts its world tour on April 10 at the Coachella Valley Music And Arts Festival.

One-time AC/DC drummer Chris Slade will play on the trek in place of Phil Rudd, who is facing trial in New Zealand.on charges of "threatening to kill" and drug possession.