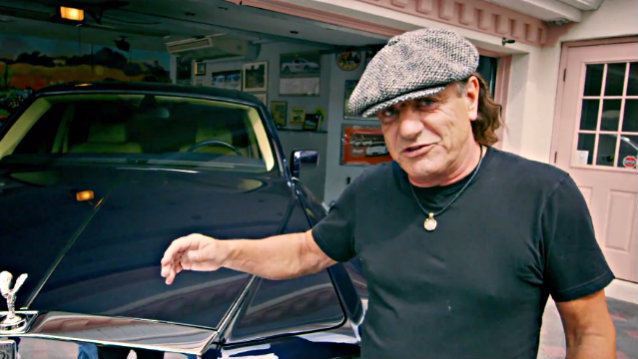 A new series hosted by AC/DC frontman Brian Johnson, "Cars That Rock", is airing in the U.K. on Thursdays starting on May 8 on Quest, Freeview Channel 38.

"Cars That Rock" is described as a series of six 60-minute episodes in which Brian looks at six of his favorite makes of car (three from the U.K. and three from other parts of Europe). Brian races some of the cars in professional races and he also drives other cars at high speed. From the Bugatti and Ferrari to the humble Mini, Brian delves into their fascinating histories, from big-screen appearances in blockbusters to some very famous owners.

A new video clip from "Cars That Rock" in which Johnson talks about his Rolls Royce Phantom can be seen below.

When Brian was asked to rank his Rolls Royce on a scale of 1-10 for an interview a while back, he gave his Phantom an "absolute 10." He added: "To me, it's the ultimate vehicle. It can go north of 60 in five seconds." The more sentimental reason behind his love for the Rolls-Royce — his father's friends used to say they would ride in one when they died. "That's never going to happen to me. I always wanted to buy one before I died."

Johnson previously stated about his love of cars: "A few years ago, AC/DC did a gig at the Nürburgring racetrack in Germany. There were 119,000 people gathered on the hills and stands. It was wonderful to stand up there with the band, but when I was on stage singing, I thought, I wish I could drive this track.

"I was once racing a Porsche when the engine of the car in front blew up. Driving through a wall of smoke, with oil all over the windscreen, I couldn't see a thing. At times like that you wonder if you will emerge alive. Now I count myself as a lucky man in that I get the opportunity both to sing and to drive.

"The idea [for 'Cars That Rock'] started when a TV producer read my book, 'Rockers And Rollers', and thought: 'Rock 'n' roll and cars — let's give it a shot.' I was quite amazed because, apart from fronting a few fun short films about racing in America, I had not really done any presenting.

"They said to me: 'Brian, can you pick six makes of car from the past 100 years that have made a significant impact on automotive history?' Of course there are dozens, but I could pick only six. It was difficult, because I knew people would disagree with some of them. It ended up being Lamborghini, Bugatti, Porsche, Mini, Bentley and Rolls-Royce. I was looking for individual genius: men who, through their inventiveness and design skills, changed the face of motorcars: Ettore Bugatti, Ferruccio Lamborghini and WO Bentley, for example."