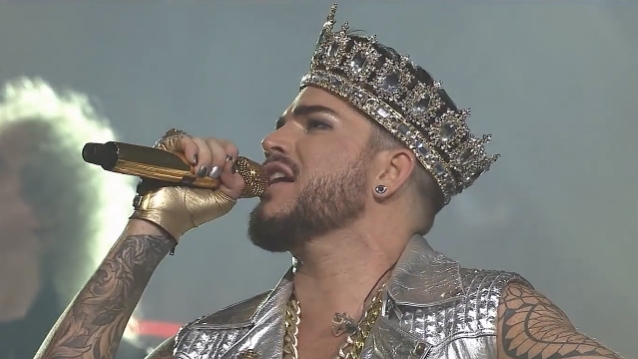 Adam Lambert says that he isn't sure it makes sense for him to record new music with QUEEN.

Lambert, drummer Roger Taylor and guitarist Brian May first shared the stage during "American Idol" in May 2009 for a performance of "We Are The Champions". They teamed up again in 2011 at the MTV European Music Awards in Belfast, Ireland for an electrifying eight-minute finale of "The Show Must Go On", "We Will Rock You" and "We Are The Champions" and in the summer of 2012, Lambert performed a series of shows with QUEEN across Europe as well as dates in Russia, Ukraine and Poland. They have since completed a number of tours and performed at some of the biggest festivals in the world.

Speaking to Hunger, Lambert said about QUEEN's plans to release more music: "People always ask if we want to record together, and I'm not sure it makes total sense, because it wouldn't really be QUEEN, because, to me, QUEEN is [late singer] Freddie [Mercury]. My favorite thing is collaborating and putting these concerts together and creating on stage — it's super fulfilling and exciting. To present these ideas to these two gentlemen — especially when they like the idea."

Asked how his experience with QUEEN has changed him as a musician, Lambert said: "I think the power of the songs is that their timelines — they didn't really follow any trends; they experimented with different sounds and musical styles; they were fearless. I've always enjoyed that side of things — they are proof it works. Playing to huge audiences all around the world and seeing them sing along and understanding the power of music is transformative to a person. It's uniting. Everyone sings along. It's bringing an entire arena together, which, in today's world, is pure magic."

May previously described Lambert as the only singer the band had found capable of filling the shoes of iconic frontman Freddie Mercury, who died in 1991 of complications from to AIDS. "Adam is the first person we've encountered who can do all the QUEEN catalogue without blinking," said May. "He is a gift from God." Taylor echoed the guitarist's sentiments, adding: "[Adam's] incredibly musical, and we certainly take anything he says quite seriously."