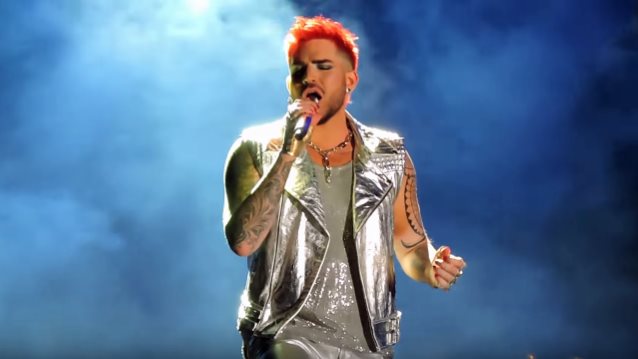 Adam Lambert spoke to ET Canada about having mighty big platform shoes to fill as the lead singer in QUEEN. The 35-year-old began touring with QUEEN co-founders Brian May and Roger Taylor in 2012, three years after they first performed together during a 2009 episode of "American Idol", the hit TV show that propelled Lambert to stardom.

Speaking about stepping in for one of the greatest rock singers to ever live, Freddie Mercury — who died in 1991 of AIDS at the age of 45 — Lambert said: "The first time, the first couple of months, actually, were terrifying — because I thought, 'There's no way I should be doing this.' And I had the confidence of the band and they were really lovely about it. And they were, like, 'No, no, no. You're great. We love it. Do what you want.' But in my head, I kept going, 'No, I don't know.' And the audience was the final judge. And the first audience we had was very supportive, and each audience afterwards was supportive, so slowly, little by little, I was, like, 'Okay, all right, okay, I can do this, kind of.' But there's no comparing to Freddie."

Lambert said that his goal from the get-go was to make sure that his execution of QUEEN's classic material was more of a tribute to the music of the iconic theatrical rock group than an attempt at imitation. He accomplished this by "asking a lot of questions, checking in with the guys, and sort of focusing more on the song itself as opposed to the recording of it, if that makes sense," he explained. "The intention of the lyrics, the mood of the song, if I kept those things in the forefront of my mind as opposed to, 'How did Freddie do it?', I usually would find my way there."

According to Adam, he was "a little older" when he "really, really fell in love" with QUEEN's music. "I was late to the game; I think I was in my early 20s when I really discovered their full power and majesty, if you will," he said. "And I was, like, 'This guy [Freddie] is the coolest guy I've ever seen,' 'cause he's running around on stage doing whatever he wants, he's wearing whatever he wants… I mean, he was so free and didn't care, and that's 'rock star' to me. So he's definitely top three rock stars of all time, in my mind."

Asked how performing the songs of QUEEN changed him as an artist, Lambert said: "I think that working with the band has taught me a lot. I think that I've learned a lot about songcraft and about how a song can connect with a mass crowd. I think Brian and Roger, individually, are… they're, like, wealths of information and experience and artistry, and so just being around them, through osmosis, I think I've learned a lot — I've expanded my mind. It's a family now, so, yeah. It's great."

When QUEEN + ADAM LAMBERT played their first North American tour in 2014, they were crowned "Band Of The Year" at the tenth annual Classic Rock Roll Of Honor awards and "Best Live Band Of The Year" in Ultimate Classic Rock's reader's poll. This year, QUEEN + ADAM LAMBERT are playing two gigantic tours, first across North America from June through August, and later in the year they sweep across Europe with twenty-six dates beginning in Prague and winding up in Birmingham mid-December.