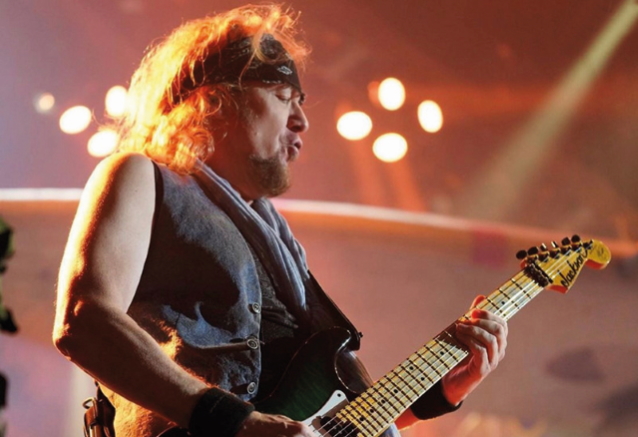 In a new interview with Robert Cavuoto of Myglobalmind, IRON MAIDEN guitarist Adrian Smith was asked if he has a favorite image of the band's mascot Eddie over the course of MAIDEN's four-decade career. He responded: "In the early days, the images of Eddie with all the bloody axes made me feel a little uncomfortable as I thought it was a bit violent. As we get older, the imagery is slightly more subtle, like with the 'Brave New World' album cover. It's broader, and you can still use the Eddie imagery in a subtle way. I'm big into subtlety."

Eddie, whose full name is Eddie The Head or Edward The Head (also known as Edward The Great),is a perennial fixture in the often-violent MAIDEN album cover art, as well as ever present in the group's live shows.

Smith is currently promoting his memoir, "Monsters Of River & Rock", which was released on September 3 via Virgin Books.

IRON MAIDEN's new double live album will be released on November 20 via BMG. Containing over 100 minutes of classic MAIDEN music and available in multiple formats, including a limited-edition Mexican Flag, triple-colored (180g) vinyl and a limited-edition deluxe two-CD book format, "Nights Of The Dead, Legacy Of The Beast: Live In Mexico City" was recorded during the band's three sold-out arena shows there in September 2019 and is a celebration of their "Legacy Of The Beast" world tour which began in 2018 and will finish next summer in Europe.