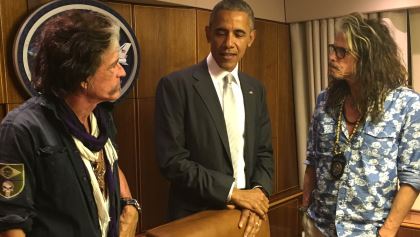 AEROSMITH's Steven Tyler and Joe Perry recently got to meet President Barack Obama when their plane was delayed while returning to the U.S. after a South American tour.

"We were stacked up over Lakeland [Florida], while his plane landed," Perry told Vanyaland, still buzzing from the encounter. "We were trying to get in before him but we missed. Then, while we're sittin' on the runway, we're lookin' at Air Force One and we got out, took some pictures and the next thing you know, we're on the plane being given a tour. Then Obama heard we were there on the plane and he said, 'If you wait 'til I get there, we'll do a little meet-and-greet.' So we ended up talking with him for a couple minutes, getting some pictures…"

While Tyler had met Obama a few years ago, this was a first for the guitarist.

"Steven met him one other time, the Kennedy Center Honors years ago [2010 when Paul McCartney was honored], and he got a chance to talk to him for a second," Perry said. "But this was the first time I've ever met a president, a seated president; it was pretty flipped out — and it was definitely worth the wait. It was one of those things where if we planned, something would've screwed up. But after a month in South America? Something like that? Hey — you know? The 'Bad Boys from Boston,' you know? Steven and I have had some pretty cool adventures, but this one is right up there.

He added: "In the '70s, we couldn't get anything but arrested. Now it's, like, we're so respectable."

Perry, who has been "a hardcore Republican" his whole life, wasn't concerned about the difference in parties while meeting Obama." He's pretty amazing, you know?" the guitarist said, "Being a Republican, I still have a lot of respect for the office, you know? Sitting there with the Commander-in-Chief and leader of the free world… it was really cool."

Back in 2009, Perry said that he wouldn't rule out one day running for office himself. "Sure, if I ever find myself in that position, I could see changing things up a little," he explained. "I've been playing rock and roll for a long time now, and if California can have actors for politicians, then maybe the rest of the country can have musicians."

Joe and Steven hanging out with President Obama on Air Force One today in Orlando Florida. pic.twitter.com/7khzsHhBeN