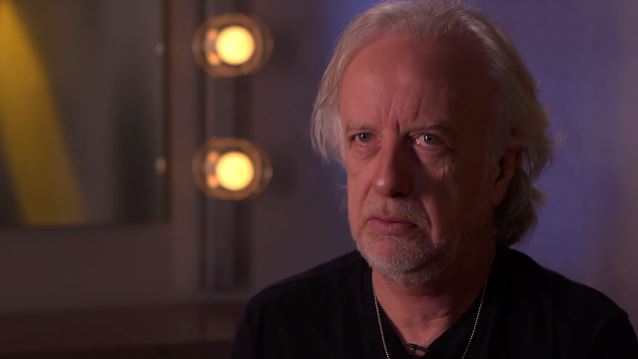 AEROSMITH's BRAD WHITFORD: 'Nothing Ever Surprises Me With' STEVEN TYLER

AEROSMITH guitarist Brad Whitford was interviewed for a recent episode of VH1 Classic "That Metal Show" co-host Eddie Trunk's podcast, "Eddie Trunk Podcast". You can now listen to it at this location. A few excerpts follow (transcribed by BLABBERMOUTH.NET).

On how AEROSMITH's "Blue Army Tour" went this past summer:

Brad: "It went very well. Unfortunately, it was just a total of, I think, seventeen shows; that's all we did. Steven [Tyler, vocals] has been hunkered down in Nashville quite a bit, 'cause he's been working on his [country solo] record there, so he was unavailable quite a bit of the year staying busy with that project he's doing. And so, he agreed to do these seventeen shows, but that's all we got. And now we're just kind of on a hiatus."

On how long of a break AEROSMITH will have before playing together again:

Brad: "Well, actually, [Steven] recently told us he wasn't gonna be available until next fall, when we have a South American tour. So, until that point, it's kind of wide open. We're not quite sure… I mean, I know what I'm gonna be doing, and I know what Joe's [Perry, guitar] gonna be doing. But Joey [Kramer, drums] and Tom [Hamilton, bass] are kind of getting left sitting out in the wind there a little bit. So I don't know. We'll see."

On whether he is concerned that if Steven's country solo career is a hit, the singer may never come back to AEROSMITH:

Brad: "We're not getting any younger. Yeah, he could have great success with this thing and maybe wanna take it out on the road and do a more extensive tour. But that's Steven. Nothing ever surprises me with him. He's very unpredictable like that sometimes. So we'll see. I hope it's a hit for him. It'll be great for AEROSMITH."

On whether he thinks AEROSMITH will make another studio album:

On whether he would be happy if 2012's "Music From Another Dimension!" turned out to be AEROSMITH's final studio album:

Brad: "Not really. I, myself, wanted to approach that album… and I couldn't get anybody to go along with me. I said, 'Let's go record this the same way we recorded [1975's] 'Toys In The Attic' and [1976's] 'Rocks', which was sixteen-track, basically live, performances. And AEROSMITH is such a good band that I wanted to basically record the band live, 'cause we play so well together. And nobody — including my producer — would go along with that. I was just, 'Man, what is wrong with these guys?' I couldn't get anybody to jump onboard with that idea. That's the one thing I hate about Pro Tools: you can use it as a tape machine or you can use it as just this crutch. 'Oh, everything will be on the grid. It's so easy to edit.' I said, 'Was it so tough to edit in the old days?' I mean, what the fuck?"