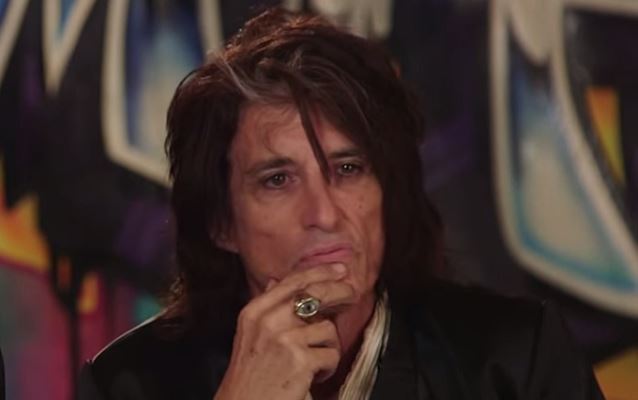 AEROSMITH's JOE PERRY: 'We'd Like To Do Another Record, I Just Don't Know When'

In a brand new interview with HNGN.com, AEROSMITH guitarist Joe Perry was asked if there are any plans for the band to record a new studio album. He responded: "We'll see how the touring goes and just see how that plays out. The main thing is still getting out on the road and then we'll figure out if and when we're going to try to come up with a new record that's worth doing"

"At this point in our career, like Billy Joel said, 'I'm not going to make new records. Why should I spend the money, why should I bust my ass when all people want to hear is 'Uptown Girl'?' And he's got a point. There's always the chance that you can have a hit; you just never know. You could pour your heart into every track and the record will just lay there and then there's other times people hear a song and think it can be a No. 1. That's part of the excitement of doing a new record to me, but, at this point, I know we'd like to do another record, I just don't know when. There's too many places to play live and I'd frankly rather spend [the time] on the road, playing Dubai or Singapore than locking ourselves in a room for X amount of weeks or months putting out an album that may or may not have any impact, when you really look at it. The last record, I think about half of it was a real classic AEROSMITH record, but it just didn't make much of a dent. That's just how the business is, and maybe the songs weren't as good as I thought they were. Why bother when we've got 'Train Kept A Rollin'' and 'No More No More' and all the songs off the first three or four records right up to the songs in the '90s that people want to hear and never heard us play live? We'll just see."

Perry also talked about how the upcoming release of AEROSMITH singer Steven Tyler's solo album will affect the band. "I'm hoping he has some success with it because, whether it's an AEROSMITH song, a solo song or whatever, we'll play it live," he said. "In fact, I told him, 'Hey, look, do you want to put your new single in the set?' and he really didn't seem excited about it, but I think that, either way, it's still a side of AEROSMITH, whether he did it himself or with someone else. It's really kind of like a debate: is it really a solo thing? If he writes a song with three other people, between that and a song that he wrote with two or three people and it goes on an AEROSMITH record? But I think that being down in Nashville he's getting different influences and he loves all kinds of music, so it just seemed like a natural thing. We've all got friends that work down there and write down there so it didn't surprise me that that's where he went to get some different inspiration. So we'll see. It's kind of backed up; he was actually planning on finishing it before this tour, so I think we'd have more to choose from if we were going to play some of his stuff, because the band's played some of my stuff on stage during the tour, so it's, like I said, it's all positive. I don't see it taking away from anything; in fact, I think it adds."