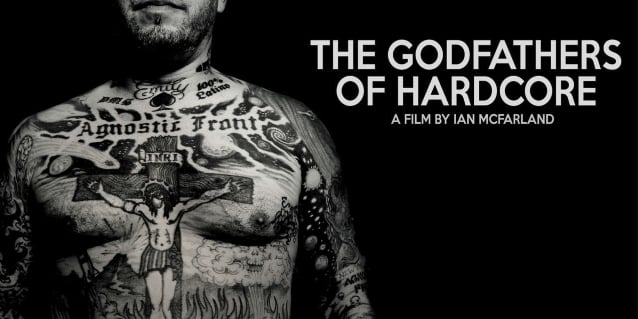 "The Godfathers Of Hardcore" documentary, which is currently available on Showtime On Demand, follows Roger Miret and Vinnie Stigma of AGNOSTIC FRONT, the legendary New York hardcore band that played a key role in defining, shaping and establishing the sound and cultural code of conduct for the still-thriving movement.

Starting in the '80s on the streets of the Lower East Side, AGNOSTIC FRONT rose to play a key role in defining, shaping, and establishing the sound and code of conduct for a still-thriving, now worldwide culture — fighting those who tried to silence them, and laying down their lives for the music they believed in. And unlike the dozens of bands that have come and gone, AGNOSTIC FRONT is still going strong — because the music they make is truly who they are.

Today, Roger, 54, and Vinnie, 63, continue to release music filled with integrity and authenticity on a regular basis while playing over 100 shows a year, including numerous hardcore and European festivals. They remain the very embodiment of hardcore, representing endurance, perseverance, brotherhood, strength against oppression and the will to keep going, obstacles be damned. AGNOSTIC FRONT exists on a level all their own — a level of their own creation.