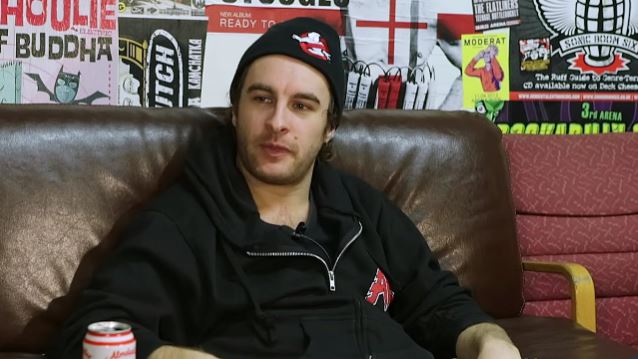 GuitarMania conducted an interview with guitarist/vocalist Joel O'Keeffe of Australian hard rockers AIRBOURNE on November 12 at the Arena venue in Vienna, Austria. You can now watch the chat below.

Speaking about the progress of the songwriting sessions for the follow-up to AIRBOURNE's third album, "Black Dog Barking", which was released in May 2013 via Roadrunner Records, Joel said: "When we're out on the road, that's what we do. You have an idea or something. A lot of times, at soundcheck, [we'll] come up with a riff. But when you're on the bus and you're sitting there and you've got nothing to do, you just might think of songs, and you put them down. I've got my guitar in the back lounge, and I'm always playing it."

He added: "We do have a rig on the bus, like a Pro Tools rig, to just [put] shit down. Through Universal Audio, actually — they've endorsed us, and Universal Audio is the shit; it's awesome. It's all fucking analog converters, so when you plug a guitar into this thing, it's like analog, and you get proper feedback."