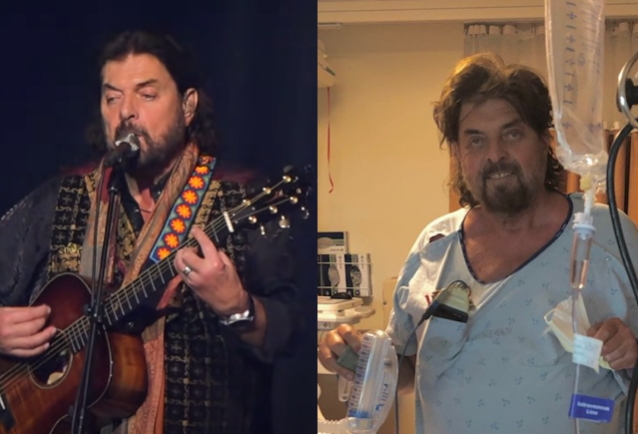 Earlier this month, Parsons had a serious spinal issue suddenly flare up, drastically affecting his mobility. His doctors ordered him to cancel his previously announced European tour and undergo a much-needed operation.

On Friday (June 24), Alan's daughter Tabitha Parsons issued the following update on his condition: "Hello, everyone. This is Tabitha Parsons writing on behalf of our entire family. We'd like to extend our sincerest gratitude to everyone for the outpouring of love, support, well wishes, and thoughts and prayers expressed for Alan and our family as he faced this urgent spinal surgery. The surgery was a success and Alan is now comfortably resting at home. There will be some lengthy recovery time, but he will be back to his normal and pain-free self soon enough.

"Thank you again from the bottom of our hearts for your continued support."

Until earlier this month, it was clear that Parsons had no intentions of slowing down anytime soon and was looking forward to a long-awaited concert tour of Europe. Following two years of COVID-related cancelations and postponements, during which time he recorded a new studio album and mixed a number of projects, including two of his live concerts and various Surround Sound updates of his classic albums, the 73-year-old Parsons and his band of highly skilled musicians known as THE ALAN PARSONS LIVE PROJECT found themselves on the road all over the U.S. during the first half of the year. This included a stint on the progressive-music-themed Cruise To The Edge in May. Additional performances were scheduled to begin throughout Europe later this June.

Following the worldwide success of two consecutive ALAN PARSONS LIVE PROJECT Blu-ray, DVD, CD and LP releases ("The NeverEnding Show: Live In The Netherlands" in late 2021 and "One Note Symphony: Live In Tel Aviv With The Israel Philharmonic Orchestra" in early 2022),Parsons was now set to release an all-new studio recording called "From The New World". The first single from the album, "Uroboros", was released at the end of May and features Tommy Shaw of STYX as a special guest lead vocalist. A second single from the album titled "I Won't Be Led Astray" will feature noted Alan Parsons alumni David Pack, formerly of AMBROSIA, on vocals, as well as world-renowned blues legend Joe Bonamassa on guitar.

"From The New World" will be released on July 15 via Frontiers Music Srl.