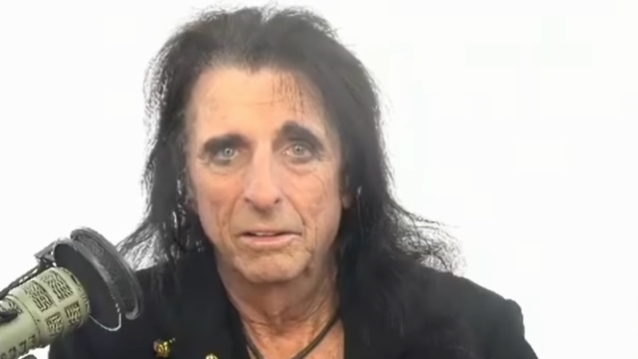 Legendary rocker Alice Cooper has revealed to showbiz reporter Richard Arnold on Friday's (February 26) episode of "Good Morning Britain" that he is scheduled to receive his second dose of the COVID-19 vaccine this coming Tuesday, March 2.

"I can't wait," Alice said (see video below). "To me, I hate shots more than anything in the world. But this is one I'll gladly get, just to get rid of [the virus].

"They do a lot of press on me getting my shot, because it encourages people to go ahead and do it," he added. "I don't know what they'd be afraid of. The shot doesn't even hurt."

Earlier in the month, AZCentral reported that Alice and his wife got the first COVID-19 vaccine after previously contracting the novel coronavirus.

In a video statement, the 73-year-old singer revealed that he and Sheryl Cooper received the vaccine at a facility in Phoenix. They got their shots through Team Rubicon, a nonprofit organization that pairs military veterans with first responders to help in times of need.

Arizona allows people 65 and over to make appointments to get the vaccine.

Last March, Cooper told Arizona Republic that he felt "less vulnerable" in his house than he does in a different hotel every day. "You don't know who's been there, what they've touched," he explained. "When I was in Europe, I spent all day doing Purell, washing my hands. Every time you would touch something, you'd realize 'Well, how do you know that wasn't infected?'"

As to whether he was concerned about the possibility of contracting COVID-19, Cooper told Arizona Republic: "I'm not scared of this thing. ... But you've got to consider everybody. You never know what the guy next door's health problems are."