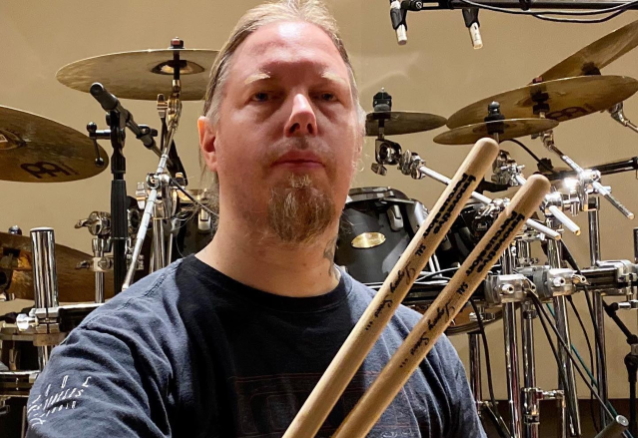 Ex-AMON AMARTH drummer Fredrik Andersson has apologized to his former bandmates for "the grievance" he has caused by publicly pleading for them to hand over what he believes is his "rightful share of the rights and publishing" to the AMON AMARTH recordings he appears on.

Andersson was fired from AMON AMARTH in March 2015, just as the band was preparing to enter the studio to begin work on its 2016 album "Jomsviking". AMON AMARTH opted to enlist a session drummer, Tobias Gustafsson (VOMITORY, CUT UP),during the recording sessions for the disc, but hired Jocke Wallgren to join them on the road. Wallgren was named a permanent member of AMON AMARTH in September 2016.

On Wednesday (February 24),Andersson took to his social media to write: "This will be my final post on the AMON AMARTH issue, and it's a positive one for me as I have come to a realization. I wrote to the members (got no reply) but want to close the book also publicly. As Einstein said, if you expect a different result you have to try a different approach.

"Backstory: After [AMON AMARTH's second full-length album, 1999's] 'The Avenger' we had a deal that we would share everything equally. We shared all money equally so that it would never be a fight about who would have their songs on the album (on the avenger the split was 100% music to Olli [guitarist Olavi Mikkonen] and 100% lyrics to [singer Johan] Hegg). The idea was that the best material would always end up on the albums no matter who wrote it. Unfortunately most (not all) of my riffs and ideas were rejected, but with this deal it didn't matter so much to me, and they were obviously rejected cause they were not good enough.

"Five years ago, after a year of fighting about royalty shares, publishing, rights and them asking for a non-disclosure, we sat down with our lawyers trying to come to an agreement. I tried to claim my 20%, but I could not prove which songs I had actually written - the drums are not legally part of the music -hence I lost my share of the rights and had my name removed as songwriter. They did offer me to keep my share of the songs I had written riffs for but being so few I told them to keep them too. I don't regret that, but I have to confess I never expected them to actually go through with removing me. They did.

"Why I felt entitled to my share: I was never 'hired', I was asked to join the band when there was no income. There was no business. In fact the first five or so years in the band there was no income. The years 1999-2008 my average yearly income was $15000/year due to low income and lost income from my day-job because of time off for tours etc. No one in the band made big cash. This was the reason we could not record fate of norns together as a band; no one of us could afford to take three weeks off from work if we wanted to also tour on the album.

"In 2007 we registerred our business, and started 'making it' around 2008. (With an average $30.000 yearly income) The band progressively got bigger from there on bit we kept a rather low payout and invested alot of our earnings back into the band. One could argue that the shares I claimed would be compensation for lost income/lost pension during the early years. And one could argue that my share from those albums are pretty small compared to what the band makes now. But me and the other members obviously have different opinions about this. Their standpoint is that we never actually said that any member would get to keep their shares of the music rights if they are no longer in the band. This is true, we never did.
We also never said we WOULDN'T get to keep the shares after a departure. This is something I assumed. Both these facts are true, but they can't co-exist. So, I will back down now.

"At one point I will know for sure as they will have to adjust their shares too if anyone else of the four members leaves the band or when they collectively retire. If they don't it will be obvious that they just wanted to rip me off of my share. But time will tell if they will get to keep their 25% each -for life- (and 70 years after death). Being the youngest I guess I'll outlive them. Until then, I give them the benefit of the doubt.

"So, with all that being said and my final airing of the issues; I apologize to the members and to the fans for the grievance I have caused fighting a lost case. It was wrong of me to assume I should get to keep my share. I'm now closing the book and I wish the band a continued great success.

"Please remember that my anger was never about losing my spot in the band, that has never been the case. I'm glad to not be in the band anymore, and I will gladly never be a part of it again. (Sorry to any fans wanting otherwise, but I think Jocke deserves all the attention he gets and I wish him all the best!)

"I'm only disappointed it ended the way it did, and realize it could have ended differently if I had admitted being wrong earlier. Albeit that would've been to an even greater economic loss for me.

"I will not, however, apologize for calling Johan Hegg a liar. The things he said about me in Sweden Rock Magazine are not true, and he has yet to apologize to me about it."

In 2019, Andersson spoke to Greece's The Gallery about the circumstances that led to his departure from AMON AMARTH, Fredrik said: "There had been some friction between me and the other members for quite some time. It seemed to me like they were ganging up on me, even if they never really truly let me in to be 'one of them,' not even in the early years. But at least back then we could hang out together and we called each other friends. In later years, and I can only guess, but perhaps they started to feel that since we were splitting all money equally, either I should be more grateful and do what they told me to or they simply started to think it was wrong that I should get equally paid. I don't know. But in the end, whatever I did or say — it was wrong."

He continued: "I specifically remember one of the last times I played in Greece. It was the last day of the tour, and we were flying home the next day. While I was warming up for the show, Olli came up to me and said my snare hits were not consistent enough. He said I played too soft during soundcheck and too loud during the show, or more specifically, he said the individual hits were either low or loud. Since I know for a fact this is bullshit, I got really pissed off. I might not be the most technical drummer, but if something, at least I'm consistent. I thought it was really untactical to come with these complaints five minutes before show, and it ruined the whole show for me. And there were lots of other occasions like this where they would just say I'm wrong about something, that my opinion were wrong or simply silly. It got very frustrating, and it built up to really strong friction."

In a 2016 interview with Brazil's "Wikimetal" podcast, Mikkonen stated about AMON AMARTH's split with Andersson: "I don't really wanna go into details regarding Fredrik, but, basically, we just separated. It's kind of like a marriage that doesn't work, and you get divorced. And that's kind of what happened to our band."

AMON AMARTH bassist Ted Lundström described Wallgren as "a super-solid drummer" who is "very professional" and "very on-the-spot all the time." He added: "It is much easier to play if you have a drummer who is [tight]. It makes our lives easier."

This will be my final post on the Amon Amarth issue, and it's a positive one for me as I have come to a realization. I...