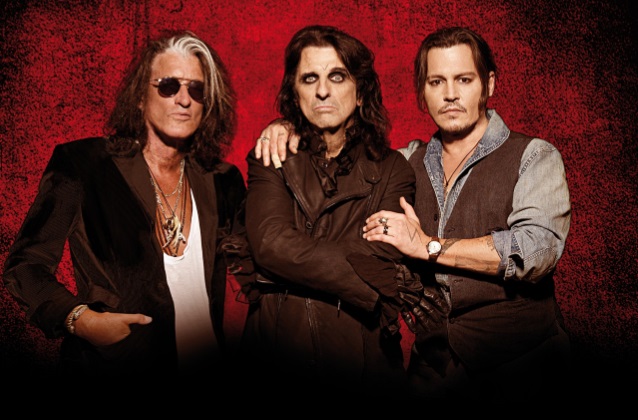 Alice Cooper spoke to Ultimate Classic Rock about the upcoming second HOLLYWOOD VAMPIRES studio album. The effort will be drastically different from the band's 2015 debut, which was comprised mostly of covers.

"The funny thing is, I'm not doing any writing on it," Cooper said. "Johnny Depp, Joe Perry [and] Tommy Henriksen have written almost 90 percent of it. I come in and do a little surgery on the lyrics. But it's interesting for me to be singing about Johnny's angst. But I wanted it that way. It stretches me a little bit, because I have to listen to the lyrics and go, 'Oh, okay, I see what he's saying here.' For once, I'm not really doing all of my songs. I'm doing somebody else's songs."

Cooper added that he welcomes the opportunity to change up the formula, explaining: "We get stuck sometimes in our style of writing. So when every once in a while you have to do something else that makes you uncomfortable. That's a good thing. It stretches you into this place and it makes you think, 'Okay, now how do I interpret this song? Because I didn't write this. So how am I going to do this?' Normally, that would be easy to do. This makes it a little harder and that's a good thing in art. Art should always stretch you."

During the 1970s in the upstairs bar of the Rainbow Bar & Grill on the Sunset Strip in Hollywood, the "Hollywood Vampires" were born. It was a gathering place where celebrated artists such as John Lennon, Keith Moon, Jim Morrison, Alice Cooper, Harry Nilsson and countless others would meet and drink into the early morning hours, and the club became legendary.

Back in 2012, Cooper and Depp decided the time was right to revive the camaraderie and spirit that defined Hollywood Vampires" (minus the drinking),creating an environment for great artists to hang, laugh and play together. Cooper and Depp were joined by Perry, along with producer Bob Ezrin, and soon the recording began. The band's debut album, "Hollywood Vampires", was released in September 2015.