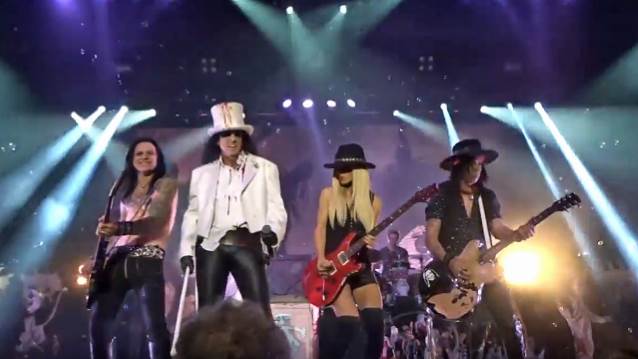 Australian-born guitarist Orianthi rejoined her former bandmates in Alice Cooper's band Sunday night (August 12) during the legendary rocker's concert at the Greek Theater in Los Angeles for a performance of the set closer "School's Out". Check out fan-filmed video footage below.

Orianthi left Cooper's band in 2014 and was replaced by Nita Strauss, the Los Angeles-based guitar shredder who made her name with THE IRON MAIDENS and FEMME FATALE.

In a 2015 interview with Guitar Player magazine's "No Guitar Is Safe" podcast, Nita admitted that not all Cooper fans were willing to embrace her when she first joined the band.

"Somebody was wearing an Orianthi t-shirt at [a] meet-and-greet and they said mean stuff to me, " she said. "People say mean stuff to me all the time, 'cause Orianthi fans hate me. She is lovely, and a great player, but we have such disparate styles that the fanbase doesn't cross over. A lot of it does, and a lot of it doesn't."

Orianthi, who was the first woman to ever play in Cooper's band, has also worked with Michael Jackson, Carrie Underwood and BON JOVI guitarist Richie Sambora. In 2012, her song "According To You" became a platinum-selling single around the world.