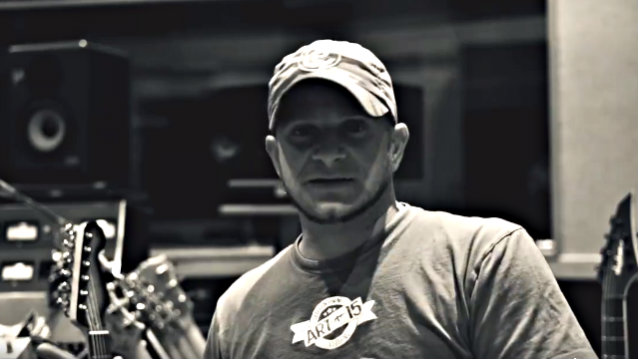 ALL THAT REMAINS Frontman: 'It's Impossible For Government To Know What Is Best For Everybody All The Time'

Brandon "Gooch" Hahn of Kilpop recently conducted an interview with ALL THAT REMAINS frontman Phil Labonte. You can watch the full chat below. A few excerpts follow (transcribed by BLABBERMOUTH.NET).

On how much government he think should be allowed in the United States:

Phil: "Personally, I think that the smallest amount of government possible is probably the best option because it's impossible for government to know what is best for everybody all the time. I think the smaller and more local the government, the better. Our system started out really, really, it was a very libertarian system when it started. We have the Tenth Amendment and states' rights for a reason. Unfortunately, it's been perverted and used for bad, to bad ends. I don't think just because there has been bad things that have happened under the mantra of 'states' rights' I don't think that means states' rights are inherently bad. The less government you can have is the best option."

Phil: "The first FIVE FINGER DEATH PUNCH show, ever, ALL THAT REMAINS played. We were second of four and FIVE FINGER was first and we were on a tour. I've known those guys forever. The way that it went is Zoltan [Bathory, guitar] texted me. We have the same management. We're both with 10th Street [Entertainment]. Falling asleep early and around two 'o clock in the morning and I woke up and looked at my phone and there was a text message from Zoltan, there's a text message from my manager, there's a phone call from my manager, there's a Twitter direct message from Zoltan and I'm like 'What's going on here?' I texted Zoltan and he's like 'Hey, can you get on a plane and come to Philly tomorrow.' My response was 'Send me a setlist.' It was just like, 'Of course.' I'll do anything I can to help my friends out. It's not the first time I've gotten a midnight call saying 'Hey, can you shoot out here and help us out?' I filled in for KILLSWITCH [ENGAGE] in a similar circumstance before, so it was definitely a little nerve-wracking because I had to learn a lot of songs in a day. A day! [Laughs] But, it's not something I haven't done before. It was cool. Anytime you can help out friends and make sure that the tour continues because it's not just the guys in FIVE FINGER. It's FIVE FINGER's crew. It's SHINEDOWN. It's SHINEDOWN's crew. It's all the crews and the promoters that have been promoting these shows and stuff. If you can go in and help people out like that, it's a pretty good feeling to do that kind of service."

On the writing process for ALL THAT REMAINS's new studio album "Madness":

Phil: "I play guitar and Mike [Martin] and Oli [Herbert], obviously are guitar players. We're the primary writers. Historically, we've approached everything as guitar first. We write riffs then go ahead and write everything else to the riff. This time, what we did, I went up to L.A. and started coming up with lyrics first. Lyrics and melodies. Then we'd come up with a chord progression, then we'd send that back to the guys and say, 'Here's the chord and the key it's in. Here's the vocal melody. Write riffs that fit with this.' So this time it was a vocal first as opposed to a guitar riff first. It's a totally different approach to the way we had written songs. It's definitely very different and cool to write like that. It's our eighth record. When you got seven records where the first thing inspired a song is a riff and now we've got a record that the first thing that inspired the song was a vocal line or a lyric, so it's a totally different approach. It's really cool to look at writing that way."

On whether writing lyrics before the music gave the new songs a more personal feel:

Phil: "I can't say that it makes it more personal, but I can say it makes it more focused on the ideas in the song, like lyrically, the ideas. It's really, like I said, it's a vocal-first thing, it's a totally different way. I couldn't say it makes the lyrics more important. Lyrics have always been the thing that I do. We'll get together and we'll arrange stuff, me and Mike and Oli, we'll have ideas. Sometimes I'll write a riff or change a riff that Mike or Oli had, but this time with the lyrics being the focus, it's definitely different, but I couldn't say it's more important. To me, that's always been the thing I focused on. Maybe you ask Oli or Mike, it might be a different answer."

ALL THAT REMAINS's eighth studio album, "Madness", will be released on April 28 via Eleven Seven Music. The effort was recorded at West Valley Studios in Woodland Hills, California with producer Howard Benson, who has previously worked with such acts as MOTÖRHEAD, PAPA ROACH, THREE DAYS GRACE, FLYLEAF, P.O.D. and HALESTORM.