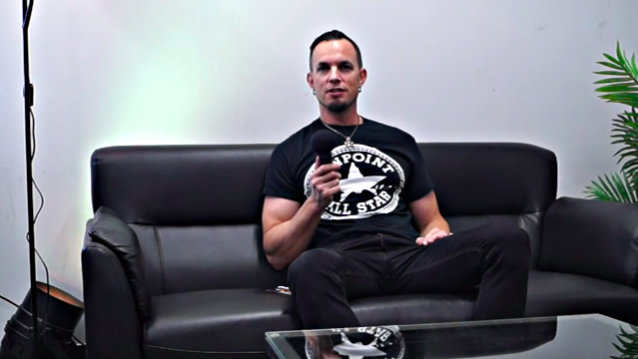 Ornella Carlone of Germany's Comebackstage conducted an interview with ALTER BRIDGE guitarist Mark Tremonti prior to the band's October 12 show at Porsche-Arena in Stuttgart, Germany. You can watch the entire interview below. A few excerpts follow (transcribed by BLABBERMOUTH.NET).

On the band's highlights from the last twelve months:

Mark: "Probably the biggest highlight was playing Royal Albert Hall [on October 2-3] with the symphony [52-piece Parallax Orchestra] just about a week ago. That was an intense couple of shows. We filmed that, so that will be out maybe springtime next year."

On recording the show at Royal Albert Hall:

On the extensive touring behind their latest studio album, "The Last Hero":

On what's next for the band:

Mark: "We're going to tour here until Halloween, then go home for a month, then go back out in the States for three weeks or so, then I'm going into the studio with my solo band."

On whether he is a self-taught guitar player:

Mark: "Yeah, I took one guitar lesson and it was one of those things where I had to buy a Mel Bay [guitar instruction] book and they tried to teach me 'Silent Night'. I just wasn't interested, so I didn't go back and I just decided to buy tablature books and learn by myself."

On whether it's easier to learn guitar on your own, or with a teacher:

Mark: "It's much easier to have a teacher. [Laughs] I didn't have the resources [to get a guitar teacher]. There wasn't a teacher nearby, it was expensive. I was turned off by the first lesson I had, so I decided… I like songwriting a lot. I wasn't much into being a magnificent guitar player, I just wanted to write songs and sing. For many, many years, I was a terrible, terrible guitar player. I was awful. My brothers used to make fun of me that I couldn't play a song from start to finish. But I was developing how to become a songwriter and how to develop my own sound. I'm glad I did it that way. If you have a guitar teacher your whole life where you're following one guitar player, two guitar players, you start sounding like those players. Learning on your own, you develop your own sound."

On the status of the next TREMONTI album:

Mark: "I think it should be [released] May 26, I believe. We haven't even gotten into the studio yet, but the plan is, right around that date and we'll be going into the studio mid-to-late January."

ALTER BRIDGE released "Live At The O2 Arena + Rarities" on September 8 via Napalm. The set was recorded at London's famous O2 Arena on November 26, 2016. That landmark performance was captured in its entirety. The two-CD, nineteen-track recording documents what an enormous presence ALTER BRIDGE have become on concert stages around the world.