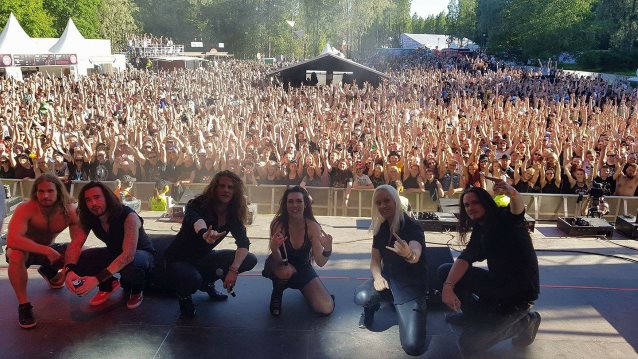 Swedish modern melodic metallers AMARANTHE have released a video for "Maximize", the opening track of the band's "Maximalism" album, released in October 2016.

A stylistically different choice from previous AMARANTHE clip, this video shows a more intimate and raw side to the band, letting the band and its performance speak for itself without any effects or extras. Shot in Helsinki by director Ville Juurikkala (BULLET FOR MY VALENTINE, HIM, SONATA ARCTICA),"Maximize" demonstrates a band oozing with confidence after nearly a thousand shows in just a few years, and puts a tasteful touch of minimalism to "Maximalism".

The video was shot before AMARANTHE recruited their latest singer, Nils Molin. However, Nils will be featured in all the band's upcoming releases.

AMARANTHE guitarist Olof Mörck comments on the video: "'Understated' is not what you usually associate AMARANTHE with — but seeing the raw emotion and personalities combined with 'Maximize', I was convinced that we captured part of the essence of the AMARANTHE live machine. Ladies and gentlemen, this is AMARANTHE at its rawest and most distilled form! See you all on the road this fall, as the 'Maximalism' world invades a city near you!"

In other news, AMARANTHE's "1.000.000 Lightyears" single has reached gold status in Sweden and "Hunger" and "Amaranthine" have both been certified gold in Finland.

Catch AMARANTHE on tour in Europe, Scandinavia, Russia, Brazil and South America this fall as well as playing a one-off show in the U.S. as part of the ProgPower USA festival in early September.