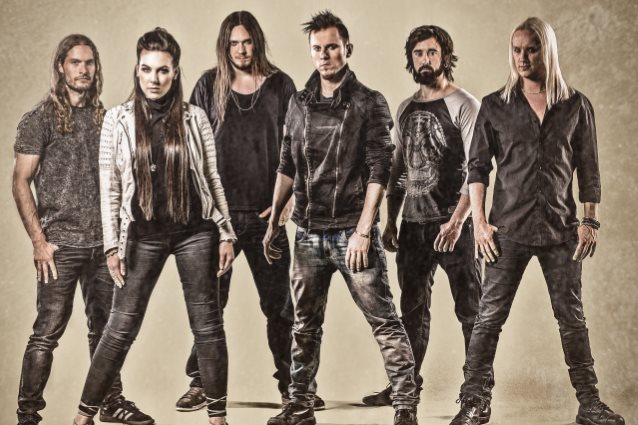 Elize Ryd says that DYNAZTY's Nils Molin is "top of the list" of candidates to join AMARANTHE as the replacement for the recently departed singer Joacim "Jake E" Lundberg.

Having previously used Chris Adam Hedman Sörbye from the band SMASH INTO PIECES as a stand-in for Jake on some of the shows in 2016 and earlier this year, AMARANTHE recruited Molin for three Swedish concerts earlier in the month (see video below).

Asked if Molin will now join AMARANTHE on a more permanent basis, the band's frontwoman told Roppongi Rocks: "I hope so! Nils is top of the list. We had fun with these gigs in Sweden. It was so much fun! He's a cool and great guy. Thus it would be great to have him in the band. Exciting! It's great with some new blood." However, as was the case with Chris Adam, Molin is a member of another band. "That's the problem," Elize said. "He's awesome. It sounded really great. His voice fits us really well. He can even reach the high octaves together with me. That was cool! We want him! We obviously would like to have him. We'll see what happens. We'll find out. He's coming with us for the Finland tour [in April]."