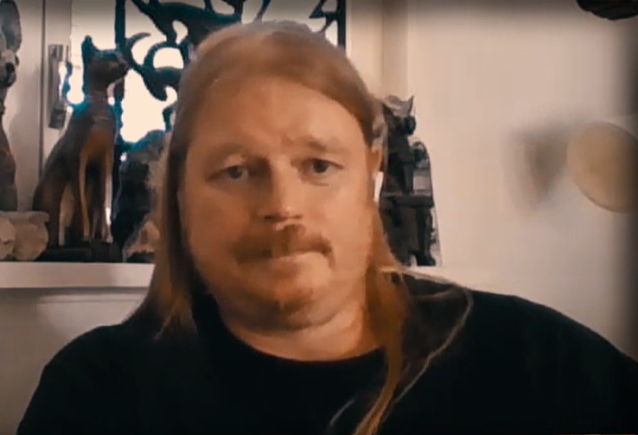 In a new interview with Jorge Botas of Portugal's "Metal Global", guitarist Olavi Mikkonen of Swedish death metallers AMON AMARTH spoke about the interpersonal relationships within the band, especially considering the fact that the group has been in existence for three decades. "I think touring is really easy," he said (as transcribed by BLABBERMOUTH.NET). "We don't really hang out when we're home — for obvious reasons. We all live in different places but also we all have families and other stuff going on. But when we work together, we work really well together. We all have the same goals; we all work at the same direction. We don't any dramas or anything; it's all good. And there's no problem sharing buses or all that. We always get along. And also on days off on tour, we always have dinner together. And I know a lot of bands that they do not see each other on days off. But we always do stuff together, so it's all good."

He continued: "We have a good vibe in this camp. And we don't really have any reasons to be angry at each other…. It is what it is. And in our camp, it's a good vibe. And like I said, there's really nothing that we argue about 'cause we don't have any issues. And whatever issues we had in the past, we kind of got rid of the issues."