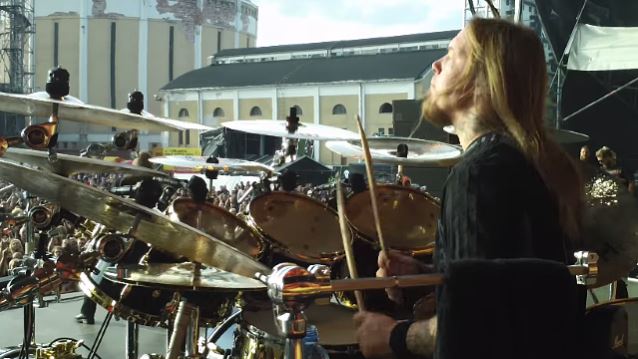 Swedish death metallers AMON AMARTH have parted ways with drummer Fredrik Andersson after 17 years. The band says in a statement: "Fredrik has been an important part of AMON AMARTH's development since he joined the band in 1998 and we wish him all the best for the future. We are currently in the process of writing the new album, but at the moment there is no replacement for him."

Added Andersson: "I am no longer the drummer in AMON AMARTH. We have decided to part ways and I wish them all the best in the future.

"I will not answer any questions about why or how, simply because it's private.

"I'm finalizing the last details with the new THIS ENDING CD, and we will look into releasing that somehow during this year. Stay tuned. I will also evaluate any future opportunities.

"I want to thank everyone that I've met, both fans and business related, through AMON AMARTH. It's been my pleasure. It's been a long sweet ride but now it's time for something new."

In a 2014 interview with Loudwire, Andersson stated about his approach on AMON AMARTH's latest album, "Deceiver Of The Gods": "I have a much more relaxed and laid back attitude in general. I let go of a lot of personal pressure that I usually have going into album recording. For me, as a drummer, in the past I always wrote every part 100 percent and made sure that was exactly what ended up on the album. On this album, I actually winged 50 percent of the stuff and just did a couple of different takes and improvised a lot more in the studio. It made me a little bit on edge when I played but it was more relaxed, not as strict and I didn't get pissed off every time I didn't nail it. I think improvising makes the album a little bit more edgy and aggressive."

Asked what the secret was to AMON AMARTH's longevity as friends and as bandmates, Fredrik said: "We kind of hit the bump already, that three-year bump or whatever it is. We have a very good working relationship and I think the key is that we went into this never expecting to come this far. I mean, we were just playing together as friends, and that's where we started off. Having no expectations when gradual success happens, we've just taken it on the same level all the time. Early on, we decided there are no egos in the band. We share everything equally; everyone has equal say on everything. We have a democracy working, [so] there's no reason for anyone to argue. Songwriting as well, even though Johan [Hegg] and Olavi [Mikkonen] write more than 90 percent of the music — when someone else in the band has ideas, if they are good then they will be in the song. There's no egos in that either; the best music always ends up on the record no matter who wrote it. Even on the albums we put 'written by AMON AMARTH,' not the person who wrote that."

"Deceiver Of The Gods" sold around 17,000 copies in the United States in its first week of release to land at position No. 19 on The Billboard 200 chart. The record arrived in stores on June 25, 2013 via Metal Blade Records.