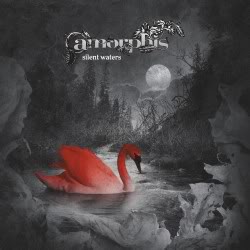 Professionally filmed video footage of AMORPHIS's July 11, 2003 performance at the Tuska festival in Helsinki, Finland has been posted at the Metal Videos web site.

Due on June 27, the "Silent Waters" single will contain the following tracks:

The cover artwork for AMORPHIS's upcoming album, "Silent Waters", has been posted online at this location. The CD was recorded at Sonic Pump studios in Helsinki, Finland. Mixing duties were handled by Mikko Karmila (NIGHTWISH, STRATOVARIUS) at Finnvox studios.

The album will be released on August 29 (Finland)/August 31 (other countries).

AMORPHIS will embark on a European tour in November. The first leg of the "Silent Waters European Tour" will take AMORPHIS to Germany, Switzerland, Holland, Belgium, Norway and Sweden before the band returns to Finland for a concert at Nosturi in Helsinki. Support on the trek will come from SWALLOW THE SUN and INSOMNIUM.