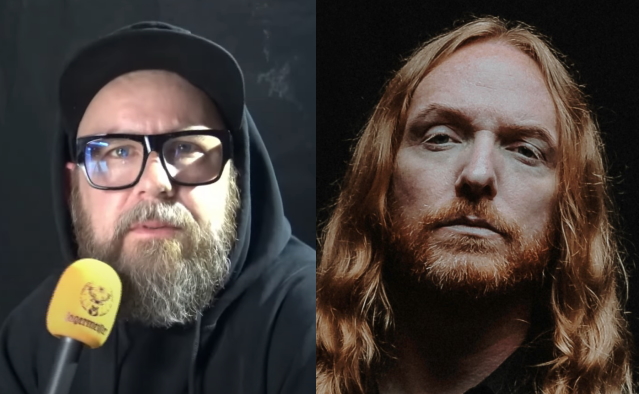 Anders Fridén, frontman of Swedish melodic death metal band IN FLAMES, has weighed in on THE HALO EFFECT, the new project featuring five former IN FLAMES members — Jesper Strömblad (guitar), Daniel Svensson (drums), Peter Iwers (bass), Niclas Engelin (guitar) and Mikael Stanne (vocals). Asked if he had a chance to catch THE HALO EFFECT when they played at Sweden Rock Festival alongside IN FLAMES last month, Anders told Chaoszine (as transcribed by BLABBERMOUTH.NET): "They played the day after [IN FLAMES played], and we were already gone by that time. We played on Friday and they were playing on a Saturday."

Fridén went on to say that he hasn't "really paid attention" to THE HALO EFFECT and added that he doesn't care about a supposed rivalry between the two bands. "People can do whatever they want," he said. "There have been former members of IN FLAMES that played in other bands. Why would this be any different?

"I think you — not you personally, but media, they want it to be something [more than that]. But they do their thing.

"Honestly, I haven't listened, but from what I hear, it sounds more like DARK TRANQUILLITY than IN FLAMES," Anders said, referencing the fact that Stanne has been a member of DARK TRANQUILLITY since that band's inception more than three decades ago. "But it's fine. I don't care. They are allowed to do music, and as long as they are happy doing whatever they do, then that's fine. It's never gonna change us and what we do. It's just one band out of many.

"Good luck. I don't have anything else to say," Anders added. "I know you want me to say more. But that's the way it is."

THE HALO EFFECT will release its debut album, "Days Of The Lost", on August 12 via Nuclear Blast.

Asked in a recent interview with "The Back Lounge" podcast about some fans' perception that THE HALO EFFECT was formed primarily with the intention of "sticking it" to IN FLAMES, Iwers said: "No, no, no. It couldn't be further from the truth. Somebody said it to me perfectly… When you get that question, well, it's like talking about your ex-wife. You had it, it was great at the time, but then you moved on. So THE HALO EFFECT started out of love for music — not at all to spite anybody or to create some rivalry; nothing like that at all. And it needs to be said, and it probably will be said a bunch of times. The love for music and the love for each other is a hundred percent what it's all about."

Peter went on to say that forming a band with the intention of competing with someone else "would be totally the wrong reason" to do it. "Everything I do I base upon how I feel," he explained. "I try to do everything with a good vibe and everything that makes me feel good, feel great. And that's what it's all about with everything that I do. So if I would ever start something to piss somebody else off, then it wouldn't make me feel good, and I couldn't keep on doing it. It's real simple in my world, but I understand how people think that and how some people would like to think that. But there's no rivalry. IN FLAMES, I was a member for 20 years. And it is what it is. It's a great band and they always will be."

THE HALO EFFECT made its live debut on June 11 at the Sweden Rock Festival in Sölvesborg, Sweden.

Last month, Iwers was asked in an interview with Australia's "Scars And Guitars" podcast if he would agree that "Days Of The Lost" is, in some ways, a "spiritual successor" to "Reroute To Remain", IN FLAMES' sixth album, which came out in 2022. Peter said: "Ooh, interesting. I haven't really thought about it. When you make music, like we do, you tend not to overthink stuff — you just go in and you write music and kind of know that what comes out will sound a certain way because of the style that we are playing and how we are playing and performing our music. So I haven't really thought about it, but maybe — maybe. It was definitely nothing intentional. We just went in. We had a bunch of ideas and we came out with a bunch of songs that happen to sound a certain way. But none of us really overthought it and it was never meant to 'it's gonna sound like this' or 'it's gonna sound like that.' We just [went], 'Let's write this music and see what happens.' And because of, like I said, how we're playing, it will sound a certain way."

Added Daniel: "A lot of people like to analyze music, and, of course, it sounds Gothenburg metal-ish because we all are from that genre and we are some of the people that kind of created it. So, of course, it will sound Gothenburg metal-ish, IN FLAMES-ish. And then which era, I don't know. And as Peter said, we don't really think about how it should sound. This is how we sound today, and with our legacy this is inevitable, that we sound as we do."

Continued Peter: "Obviously, people like to do a lot of comparing between us… It's a difficult topic to discuss because none of us have — even though we've all been in IN FLAMES at some point, none of us have really thought about this as what you're saying. But then a lot of people that we speak to say it. So it's a little hard to take in, as we've been very thorough in just writing music. But I'd say it's a little flattering to hear it."