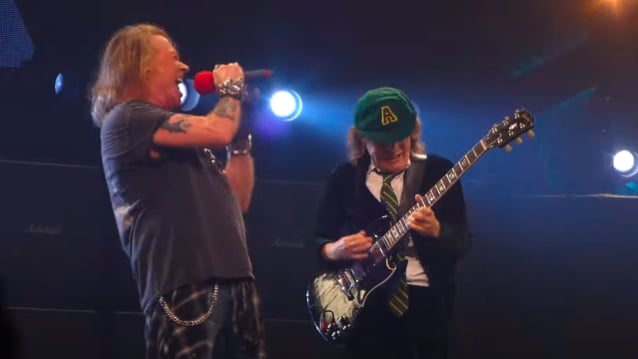 Angus Young says that the possibility of AC/DC continuing with singer Axl Rose after the completion of the band's "Rock Or Bust" tour "never really came up."

In a new interview with Total Guitar, Young said: "That never really came up. Axl was really very generous, and he helped us out to get through our touring side at a difficult spot. He had contacted us and said he could help if it didn't interfere with his own commitments of what he was going. ... He wanted to come in and try songs that he himself liked, and he was suggesting songs I hadn't played in a long time. I'm definitely grateful that he volunteered, and that had helped us finish off our commitment. But he has his own life."

AC/DC will release its long-awaited comeback album, "Power Up", on November 13. The follow-up to 2014's "Rock Or Bust" was recorded over a six-week period in August and September 2018 at Warehouse Studios in Vancouver with producer Brendan O'Brien, who also worked 2008's "Black Ice" and 2014's "Rock Or Bust".