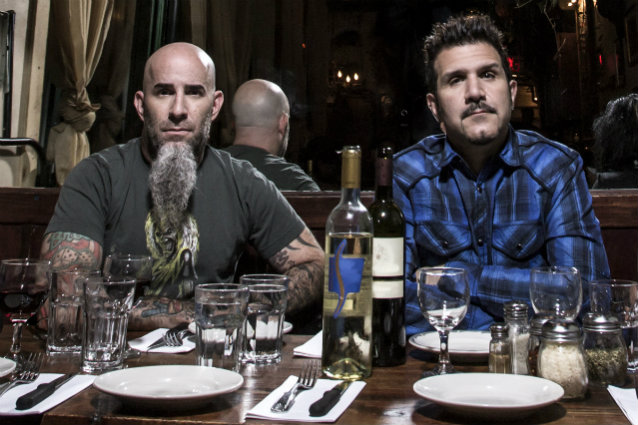 ANTHRAX Guitarist: 'Saying That TRUMP Is Gonna Be The End Of The World Was Giving That Guy Way Too Much Credit'

Bonfire conducted an interview with ANTHRAX guitarist Scott Ian and drummer Charlie Benante prior to the band's April 5 concert at the Electric Factory in Philadelphia, Pennsylvania. You can now watch the chat below.

Asked how he feels about the deeply entrenched political divisions in America following the 2016 presidential race, Scott said: "Honestly, I checked out a while ago. The barrage of twenty-four-hour crap… I must admit I bought into it in the beginning. We were actually overseas, we were in Asia, flying home on election day, paying attention in airport lounges on our way home. And, yeah, that first month, and then certainly after the inauguration, I got sucked in. And then I realized, you know, this is…

"Honestly, I truly believe, yeah, some bad shit's gonna happen, maybe some good shit's gonna happen. All in all, my deep-down belief is whatever happens in the next four years, it's not the end of the world. And I don't have enough time in my day, I have too much to do, honestly, to sit and have the news on in the background and to get angry about things I personally am not going to be able to… I can go to all the marches in the world and shake my fist and spend three hours a day posting on Twitter, but there's way more things I can do to be productive in my life."

Added Charlie: "We all have to concentrate on what we all do in our day-to-day lives, and that's kind of… We all have children, we all need to make a living, we all are getting up there in age now, so when you mention something about health care, it does have an effect on us, because, you know, if one of us gets sick or something, we have to pay attention more to what's going on in that sense of the world, in our country. My problem is there's too much from this side to that side, and it's become such a clusterfuck that I don't know who the hell to believe anymore."

Continued Scott: "Look, we are on tour. We've been playing shows since we… We left for tour February 1st this year, with a new regime in power here in the United States, and certainly when we are looking out at thousands of people at a show, half of 'em are thinking one way and half of 'em are thinking the other way. But when we're all under the same roof, nobody gives a shit. So if there's a way to channel that somehow… Because we'll play the Electric Factory tonight, and we're all under the roof for the same reason — because we're here to have fun. We're here to fucking bang our heads and have a good time and be entertained."

Ian went on to say: "There really is — not to sounds so clichéd and cheesy — but there really is a way for people to get along; there really is. Because everyone can agree on music. When you're going to see a band, you get fifty thousand people in a stadium to see METALLICA, you know not all of 'em have the same political beliefs, but they're all there to see METALLICA. Certainly sporting events — same kind of thing. You've got a stadium filled with baseball or football or whatever fans, half and half. But they're all there rooting for the same team. So there are ways we can get along as a people. That's why I say it really isn't the end of the world. I think saying that [Donald] Trump is gonna be the end of the world was giving that guy way too much credit."

Charlie added: "There are things that we need, okay? Our economy, of course, needs to flourish. We need to have a great economy. We need health care in this country. That's important. The other thing that's really important that nobody really understands is that we all need to breathe, we all have to breathe. So if you're not on board with environmental issues, then I think we're missing a huge thing. That, to me, is the most important thing."

ANTHRAX and KILLSWITCH ENGAGE kicked off "The Killthrax Tour" on March 29 at the Wellmont Theater in Montclair, New Jersey.

With ANTHRAX and KILLSWITCH ENGAGE rotating the closing slot over the course of the dates, the tour will criss-cross the continent, wrapping up in Boston on May 7. THE DEVIL WEARS PRADA is providing direct support on all dates.

ANTHRAX's February 15 concert at the Barrowland in Glasgow, United Kingdom was filmed for a DVD, to be released later this year via Megaforce. The DVD is being produced and directed by Paul Green of the Manchester, U.K.-based Paul Green Productions who has filmed concerts for OPETH, THE DAMNED, Gary Numan, THE LEVELLERS and many others.