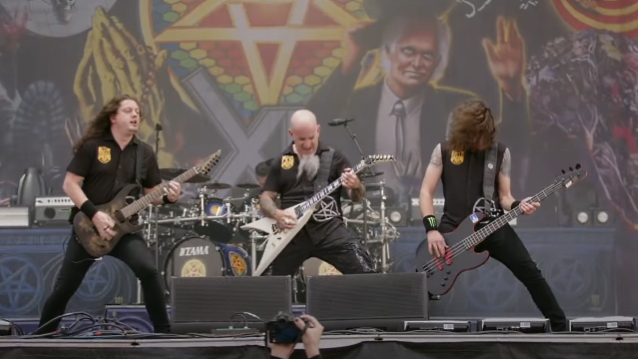 Professionally filmed video of ANTHRAX's entire November 14 performance at the Welcome To Rockville festival at the Daytona International Speedway in Daytona Beach, Florida can be seen below.

ANTHRAX has been celebrating its 40th anniversary at various festivals this summer and fall. Their current live show backdrop is a collage of their album artwork beginning with "Fistful Of Metal" all the way through "For All Kings".

Formed by guitarist Scott Ian and bassist Dan Lilker in Queens, New York on July 18, 1981, ANTHRAX was one of the first thrash metal bands to emerge from the East Coast and quickly became regarded as a leader in the genre alongside METALLICA, SLAYER and MEGADETH.

"For All Kings"'s arrival followed a five-year period during which the group experienced a rebirth of sorts, beginning with ANTHRAX's inclusion on the "Big Four" tour, and continuing with the 2011 release of comeback LP "Worship Music".

Frontman Joey Belladonna, whose most recent return to ANTHRAX was officially announced in May 2010, was originally the lead singer of ANTHRAX from 1984 to 1992, and was considered part of the band's classic lineup (alongside Dan Spitz, Ian, Frank Bello and Charlie Benante),which reunited and toured during 2005 and 2006. His voice was featured on over 10 albums, which reportedly sold eight million copies worldwide.