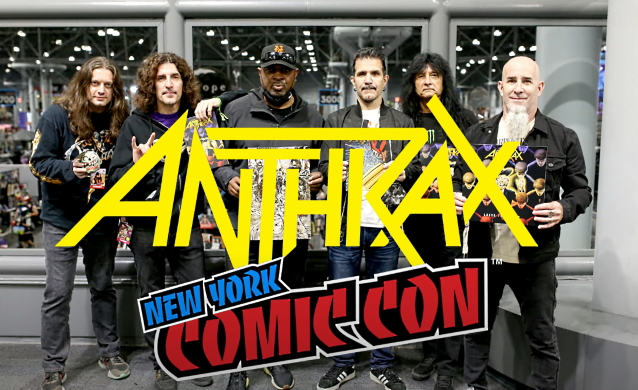 ANTHRAX — Frank Bello, Charlie Benante, Scott Ian, Joey Belladonna and Jon Donais — made a special appearance at the New York Comic Con earlier this month, in support of the band's graphic novel, "Among The Living", released in July via Z2 Comics. In addition to signing copies of "Among The Living" and taking photos with fans, ANTHRAX reunited with PUBLIC ENEMY's Chuck D for a question-and-answer session celebrating their 1991 landmark collaboration of "Bring The Noise". Check out the wrap-up video below.

During the recording of ANTHRAX's "Persistence Of Time" album, Ian suggested the band — all big PUBLIC ENEMY fans — record a cover of PUBLIC ENEMY's "Bring The Noise". He loved the idea of recording a metal version of the song, of melding his guitar sound with Chuck D's voice, plus, PUBLIC ENEMY had name-checked ANTHRAX in the lyrics. Once the demo was arranged and recorded, Scott sent a cassette of it to Chuck D with the pitch for Chuck and Flavor Flav to record a version of the track with ANTHRAX. After hearing the demo, Chuck D wholeheartedly agreed. In June, 1991, the ANTHRAX-PUBLIC ENEMY collaboration of "Bring The Noise" was released on ANTHRAX's B-sides/rarities album "Attack Of The Killer B's", and then on PUBLIC ENEMY's "Apocalypse 91...The Enemy Strikes Black" album in October of that same year. The song blew up, and received a Grammy nomination for "Best Metal Performance." Then, on September 24, 1991, as part of ANTHRAX's "Persistence Of Time" touring cycle, the two bands went out on the road together, the "Bring The Noise Tour" — ANTHRAX and PUBLIC ENEMY, with PRIMUS and the YOUNG BLACK TEENAGERS supporting. The shows ended with ANTHRAX and PUBLIC ENEMY on stage together performing "Bring The Noise".

In an interview with the Cleveland Music Examiner, Ian stated about ANTHRAX's original decision to record a cover of "Bring The Noise": "By that point, there was a new audience, and we certainly reached a lot of new people with that PUBLIC ENEMY track. People who maybe weren't into what we'd done before, or who weren't metalheads. So that track crossed over for us and took us into a new zone. But it's funny, because we haven't done anything rap or crossed over since 'Bring The Noise', yet people once again still talk about it, which shows me how special it was. People still want to hear it and people still reference it all the time, and it's almost 25 years old. And sometimes we're categorized as a 'rap metal' band, when we only ever did the two songs — other then maybe screwing around with 'Looking Down The Barrel Of A Gun' with the BEASTIE BOYS as a B-side — but yeah. People still talk about it as if that's what we do."