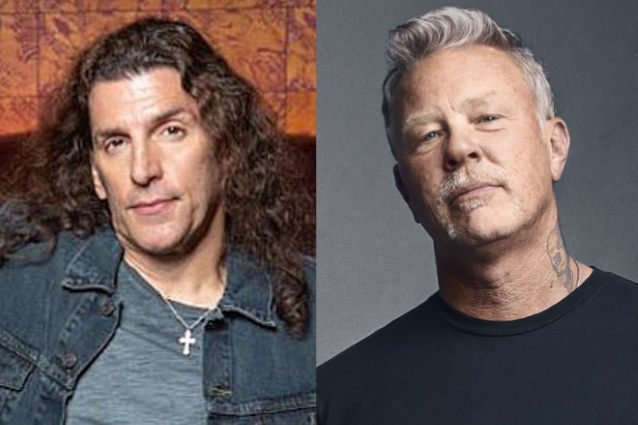 ANTHRAX's FRANK BELLO Thanked METALLICA's JAMES HETFIELD For Organizing 'Big Four' Shows: They 'Didn't Have To Do That'

ANTHRAX bassist Frank Bello returned to Rock City Music Company in Livonia, Michigan on November 20, 2021 for an intimate question-and-answer discussion, acoustic performance and book signing in celebration of his memoir, "Fathers, Brothers, And Sons: Surviving Anguish, Abandonment, And Anthrax", which was released earlier that month. At the event, which was hosted by Meltdown of the Detroit radio station WRIF, Frank took questions from the audience, shared stories about auditioning for ANTHRAX, learning how to play the bass, touring with METALLICA, his last memory of late METALLICA bassist Cliff Burton, and even took part in a rare, acoustic performance of the ANTHRAX classic "Only". Frank then took time to sign copies of the book as well as other memorabilia for all fans in attendance.

Bello, whose book includes the story of his father's abandonment of their family when he was 11 and the damage it did to Frank emotionally, said that he was partly inspired to write about the experience by METALLICA's James Hetfield, whose father left his family when he was 13. Hetfield previously opened about his family history in a 2011 documentary called "Absent", a movie directed by Justin Hunt, which examines the impact on society of growing up without a father.

"We were playing with METALLICA on Sunday [November 14, 2021 at the Welcome To Rockville festival at the Daytona International Speedway in Daytona Beach, Florida]," Frank said (as transcribed by BLABBERMOUTH.NET). "I bought the book for James. I wanted to hand it to him and say 'thank you.' After the ANTHRAX set, I was ready. I made a beeline for my friend James. And I said, 'I wanna let you know this book would not have been possible without getting the 'go' from you, without getting that 'okay, I can talk about abandonment from my father' by what the words you said in 'Absent'.'"

Bello also talked about the so-called "Big Four" of 1980s thrash metal — METALLICA, MEGADETH, SLAYER and ANTHRAX — who played together for the first time in history on June 16, 2010 in front of 81,000 fans at the Sonisphere festival at Bemowo Airport in Warsaw, Poland and shared a bill again for six more shows as part of the Sonisphere series that same year. They reunited again for several dates in 2011, including the last "Big Four" concert, which was held on September 14, 2011 at Yankee Stadium in New York City. Since then, METALLICA, SLAYER and ANTHRAX had played a number of shows together, including the 2013 Soundwave festival in Australia. They also performed at the 2014 Heavy MTL festival in Montreal, Quebec, Canada.

"METALLICA didn't need to do the 'Big Four,'" Frank said. "They could sell out those stadiums on their own. They're arguably the biggest band in the world. [When I spoke to James at Welcome To Rockville], I told [him], 'Look, if nobody's told you this before, and I don't know if they have, thank you. Straight out, thank you. Dude, thank you. You didn't have to do that.' And he goes, 'I get it, man.'

"James is one of those great humble guys," Bello continued. "He knows what he has and he knows he's the deal, but he's humble enough to say, 'I get it, dude. It's a celebration.' That the 'Big Four' was a celebration of this thrash movement coming up. That's what it was for all of us; it really was — the bands and fans. So, yeah, man. I said, 'Thank you, dude. You didn't have to do that. I know you guys didn't have to do that. You did it to celebrate. Now, I just wanna let you know, from Frank Bello talking to my friend James…'"

Three years ago, Bello said that he believed SLAYER would come out of retirement to play more "Big Four" concerts.

"I think if you ring up my friends in SLAYER [and tell them], 'We're doing the 'Big Four,'' I think they'd play some shows," he told Graspop Metal Meeting. "I think they would work it out. I think [they would come out of retirement for it]. The 'Big Four' is special enough that we all rise to it. I would hope they would do that. I mean, I would certainly try to talk them into it."

All my metal head friends…in case you haven’t heard, Rock City Music Company will be welcoming back legendary Anthrax…

WOW! We mean WOW! On behalf of the entire staff at Rock City Music Company we would like to thank each and everyone of...