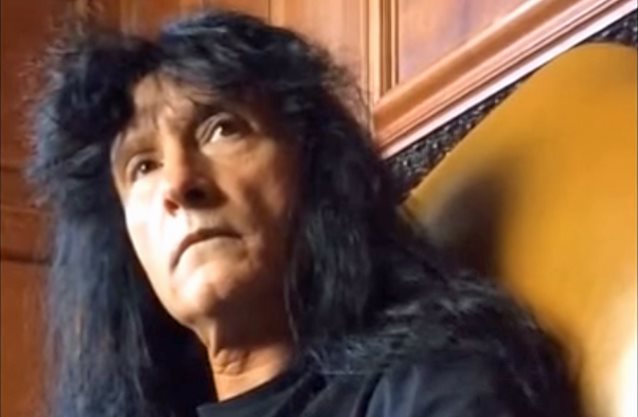 ANTHRAX's JOEY BELLADONNA Talks About Making Of 'For All Kings' (Video)

ITN Magazine's William Parks recently conducted an interview with ANTHRAX singer Joey Belladonna. You can now watch the chat below. A couple of excerpts follow (transcribed by BLABBERMOUTH.NET).

On the songwriting process for ANTHRAX's new album, "For All Kings":

Belladonna: "I kind of come in at the end. I've always come in at the end. I don't even do pre-production. I don't even hear the songs until they're done, to be honest with you. And that's the way we've done it. I come in… I mean, I literally… I've heard the stuff prior to going in [and laying down vocals], but really hadn't had a chance to… I'll play with it a little bit, but whatever I do at home, if I was to let you listen to what I did at home and let you listen when I finish, it has a moment or two, but, really, in the end, I go in… We print out the lyrics, when finally the lyrics are written… 'Cause I'll get the song of them playing — just music — and a lot of times not even finished; it's just some general ideas. And I just kind of just splatter all over, just to kind of get a key and get a flow of what it's doing. When I go in, I just bring a sheet of words in there and have a little idea of where to come in and how to kind of put it on the table. And then I go from there. And then me and [producer] Jay Ruston, we just kind of haul ass. Jay was there helping with them in the very beginning. The last album, he came in and mixed. This one, he came in from the beginning. And I'm sure that they go, 'Let's change a part. Let's do a different thing.' You know, with some kind of ideas. I wasn't there, but I assume he'd interject. With me and him, we do that all day long, but we do it in a day. We finish the song pretty much in a day and it's up and running. Neither one of us have any idea of what it's gonna sound like. And nor does the band. So the band gets it, and they're, like, 'Wow!' We just e-mail it, and if they like it, I'm on to the next song. And that's just basically what it is."

On how different making albums today is from the way it was in the early days of his time with ANTHRAX:

Belladonna: "Well, for me, it's a lot easier, because I get to do it alone. I get to do my thing. I basically get to go and get in there and just let it happen without anybody even having a… where they can stop you in your path. I mean, Jay, yeah, sure, [he'll go], 'That was pretty good. Try that again.' Or, 'I love that idea. Do that again. That's great.' [Whereas in the past] you had other people that were, like… everybody wanted to put their idea there, for whatever reason. And I'm a lot better [now] anyhow [than I was], so I feel way more confident how to do what I do with the band, and I don't really think about it anymore. Before it was really difficult, 'cause it was… I didn't even really know what I was gonna do and how it was gonna come out. We used to spend hours and hours. It was so hard. I would get beat — I mean, literally get beat down — doing it. 'Cause it's different. It's not even really something you can explain, how to sing. It's not easy to sing over it, 'cause it's so quick and the keys are not even in place. So you've gotta follow all that stuff. And I'm trying to make something fit, melody-wise; I'm always trying to put a hook in there. Now I have a lot more chance to do that; it feels right. It's gotten better, you know. And it's not ideal either. This album, by any means, wasn't easy to do. We did it fast, but it wasn't that easy."

On how ANTHRAX came up with the new album title, "For All Kings":

Belladonna: "That's all Scott [Ian, guitarist]; he came up with that. I didn't come up with any of that. There's a lot of stuff that comes up on these albums that I never really have a chance to interject or even… I didn't even know the running order [of the songs]; that's how different some of the stuff works. There's people… Everybody's doing something that someone else might not even have a chance to even participate in. I mean, I've never even seen covers when they came out. Maybe that's all too much information, but that's the way it is. It's different, you know. A lot of bands, somebody else might be doing that."

"For All Kings" will be released on February 26 via Nuclear Blast in Europe and Megaforce in the U.S.