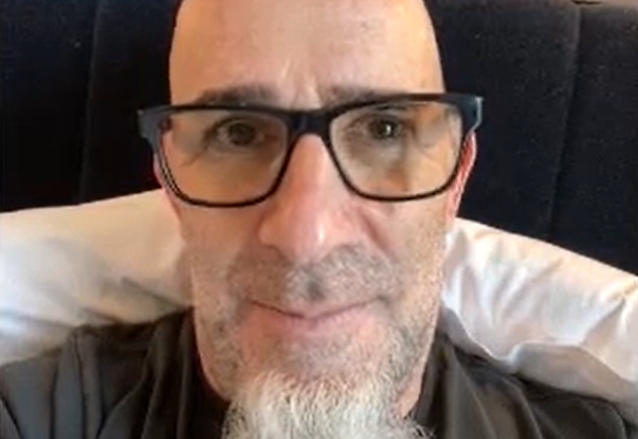 ANTHRAX's SCOTT IAN Looks Back On 'Among The Living': 'That Album Gave Us Our Career'

"[Eddie] was really able to capture what we sounded like in the room, what we sounded like to ourselves when we were rehearsing; he was able to capture that," Scott said (as transcribed by BLABBERMOUTH.NET). "That's why we wanted to work with Eddie. We felt like his studio records always sounded really what a band sounded like — stripped down; no B.S.; that's the band in a room playing their songs. And when we would be in our rehearsal room working on stuff, we wanted to capture that, so people could feel that same thing we felt when we were in this small little room and everything's super loud and it's just raging and exciting and we're bouncing off the walls. That's what we wanted on that record, and we definitely captured it with Eddie."

Regarding the enduring impact of "Among The Living", Scott said: "It's safe to say that that record and then all of the touring we did on the back of it, it left such a mark on the world for us. That record basically enabled us to have a career; that album gave us our career. It enabled us to call our own shots and do what we wanted to do and not have anybody get into our business and try and tell us what kind of band to be or how to write our songs or any of that crap that bands go through. 'Among The Living', it opened the door to a world where we just got to be ANTHRAX and everybody just left us alone, and that's a great place to be when you're in a band. And that's why we're sitting here talking about a 40th-anniversary tour, even though we're actually technically 41 now."

Kramer reflected on the experience of working with ANTHRAX during a 2021 appearance on "The Eddie Trunk Podcast". Asked what it was like producing a band that heavy in his career at that time, Kramer said: "It was a big change. I had no idea what I was getting into quite frankly, and I think I learned a lot. I think that there were definitely differences of opinion within the band and myself as to directions, but I do remember having a tremendous amount of fun with them. And I remember the surprise hit that became a top hit in the U.K. — 'I'm The Man'. Who would've thought? The band completely did a whole 180 in the studio. Charlie Benante was playing bass, everybody switched instruments, and I ended up playing piano on it.

"Did I learn a lot? You bet I did — because this was the first time being approached by a heavy metal band. I think in the end, it became a classic because of the intense playing, and that's the thing I learned about it — [it doesn't matter if it's a heavy metal record, a blues record... If the intensity is there, if you pay attention to what they're trying to say, and it took me a while to figure out their message, which was strange and different for me. But I learned a hell of a lot, and I love those guys. That was genius."

Building on an underground following with signature tracks such as "I Am The Law", "Caught In A Mosh" and "Indians", "Among The Living" catapulted ANTHRAX to widespread recognition and earned the group's first gold award. It also marked the height of the band's use of horror and comic book inspirations, with the title track and album cover image based on the Stephen King novel "The Stand", "A Skeleton In The Closet" on King's novella "Apt Pupil", and "I Am The Law" on the comic book character Judge Dredd.

This past July, ANTHRAX revealed that the band's longtime producer Jay Ruston was working on a Dolby Atmos mix of "Among The Living".

"We have the master tapes, which we didn't even know if they survived that fire or not, but apparently they did," Benante said during an appearance on SiriusXM's "Trunk Nation With Eddie Trunk", referencing the 2008 blaze at a Universal Studios backlot in Hollywood, California in which the master recordings of an estimated 500,000 songs by many of the past century’s marquee musicians were destroyed. "And Jay has been remixing it and I heard some of it and I was just blown away. Like, 'Wow!' Jay played some [of it for me], and I was just, like, 'Dude, this sounds amazing' — as if we did it yesterday."

According to Benante, the idea to do a Dolby Atmos mix of "Among The Living" came from the record company, Universal. "[They] approached us to do it because they've been doing these," he said. "And, of course, they picked that record first. It's gonna be awesome, though."

Ian added: "They had a list, apparently, of the albums that hadn't been done yet in Dolby Atmos and we were high up on that list; they really were interested in doing that with us."

Charlie went on to say that what he has heard so far of Dolby Atmos mix is impressive. "The tones are so awesome, and it's so heavy," he explained.

Dolby Atmos lets you precisely place and move sounds in three-dimensional space with the introduction of audio objects — and with much more precision compared to traditional surround. And with the addition of overhead speakers, you can create a fully encompassing soundstage to make listeners feel like they're inside the experience.

Dolby Atmos automatically optimizes content based on the number of speakers in the environment or device, so your mix delivers the best experience it can for mobile devices enabled with Dolby Atmos, home theaters, soundbars and even headphones.