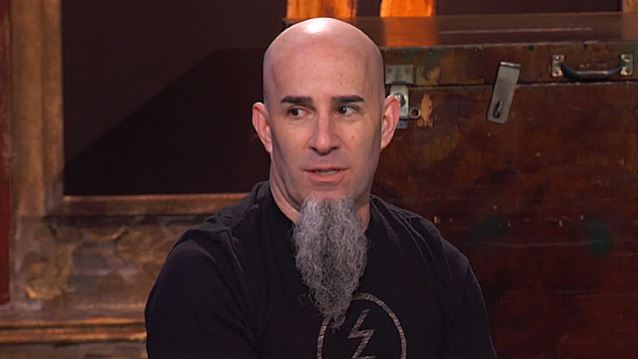 During the latest "That After Show" segment of "That Metal Show" on VH1 Classic, ANTHRAX members Scott Ian (guitar),Charlie Benante (drums) and Frank Bello (bass),along with Alex Skolnick of TESTAMENT, spoke about when they stopped being fans of KISS's music.

Said Ian: "I was already way into AC/DC [by the time KISS released 'Dynasty' in 1979] and my taste had kind of changed. I went to see [KISS] at Nassau Coliseum [in Uniondale, New York], I think, on [the 'Dynasty'] tour, with [JUDAS] PRIEST opening, and me and my friend left after PRIEST. I mean, I was 15, and my taste had kind of changed already at that point. Don't get me wrong: from the first album to 'Alive II', that period, to me, still means as much in 2015 as it did, to me, in 1977. Like, that's what an imprint it made on me. That still means everything to me."

Ian last year defended KISS leaders Paul Stanley and Gene Simmons for their refusal to perform with only the band's original lineup at KISS's April 2014 Rock And Roll Hall Of Fame induction ceremony in Brooklyn. Scott said: "I'm a [KISS] fan, just like everyone else, so would I wanna see the four original dudes back in makeup one more time? Of course I would, as a fan. But bands don't do things dictated by what the audience wants. A band would last about a year if that's how you worked. You have to do things the way you wanna do them."

He continued: "KISS has been around for 40 years and are bigger now than they were in 1977 because Gene and Paul make smart decisions — that's why. So, as a fan, and if you love them, you have to abide by the decisions that Gene and Paul are making for their brand and their band. So, why people get so upset over these things, I really don't undertand. Like, if they decided they were playing with [current KISS members] Tommy [Thayer, guitar] and Eric [Singer, drums], so fine. That's what they're doing. This is their band. This has been the lineup for a long time now."