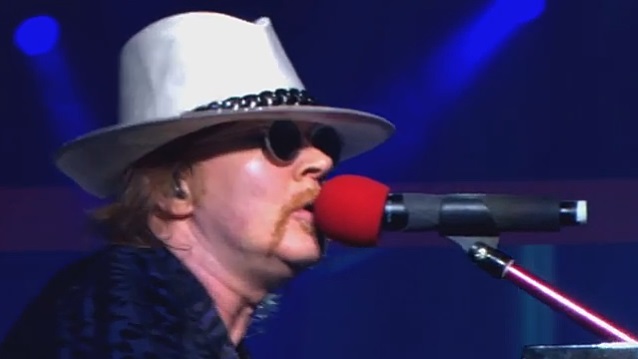 Del James, a close friend of GUNS N' ROSES lead singer Axl Rose who also works as the band's road manager, says that Rose is not nearly as hard to deal with as he is portrayed in the media.

During an appearance earlier tonight on "At The Fights", a boxing talk show on SiriusXM, James spoke about his relationship with Axl. He said: "I've been down with [Rose] since 1985. If the guy was as difficult as people say he is, no one could have stuck it out that long. There's no amount of money worth that big of a headache. And the reality is, the truth of the matter is, whenever my kids needed something and I couldn't afford it — whatever it was; a medical bill or whatever — he was the first one [to say] 'Yeah, I got it. And don't worry about it.' He is the guy who you call if you make a mistake and need to be bailed out at 4 o'clock in the morning. He makes sure you're taken care of, and he looks after his better than anyone else I can think of."

"At The Fights" with Randy "Commish" Gordon and "Gentleman" Gerry Cooney airs Mondays and Fridays 6-8 p.m. EST on SiriusXM Sports Zone channel 92 and the SiriusXM app.

Del's short story about a woman who kills herself was reportedly the inspiration for the GUNS N' ROSES video for the song "November Rain".

Rose, guitarist D.J. Ashba and other members of the current lineup have hinted at material recorded during the "Chinese Democracy" sessions that has yet to surface.