ANTHRAX's SCOTT IAN 'Understands' Why SLAYER Is Calling It Quits

ANTHRAX guitarist Scott Ian says that he understands why the members of SLAYER have decided to call it quits.

Last week, SLAYER, one of metal's most popular and influential bands of the past four decades, announced its "final world tour" via a 30-second video. The group also confirmed that its last-ever North American run of dates would feature support from LAMB OF GOD, ANTHRAX, BEHEMOTH and TESTAMENT.

In an interview with Meltdown of Detroit's WRIF radio station, Ian was asked how felt about SLAYER pulling the plug on an impressive three-and-a-half-decade career.

"We've obviously been friends for a very long time, and even in the last seven or eight years, we've played quite a few shows together — a couple of major tours in the States and Europe," Ian said (hear audio below). "So when we got the call a couple of months ago asking if we'd like to be a part of this… At the time, when I first heard about it from our agent, there was no inkling that this was going to be some type of goodbye tour; it was just, like, 'Do you wanna be part of this sick metal package with SLAYER and LAMB OF GOD and BEHEMOTH and TESTAMENT?' And I was, like, 'Yeah.' I got excited. I'm always excited about touring, but that e-mail comes in, and I got excited like a kid, like, 'I can't wait to get tickets for this.' 'Cause that hasn't happened in a while. The Mayhem tour's been gone now for a couple of years, so there hasn't been a major summer metal tour in a long time, and this obviously fills that void in a big way. And I got really excited."

According to Ian, he was unaware that the upcoming tour would mark SLAYER's final run "until the day they publicly announced" it. "I saw that just like everyone else out there, that this was the beginning of the end," he said. "And I was, like, 'Wow!' I had no idea. I mean, I've known… Obviously I'm friends with the guys and I know from speaking to them that this day was going to come and their schedule had slowed down as compared to what it had used to be. But I didn't know it was happening now. My only hope is that their goodbye tour will take about three or four years to finish. My hope, as a fan of SLAYER, that they really, really pound it into the ground because there's a lot of people that are gonna wanna see 'em a couple of times before it's over, probably."

Scott said that he "gets" why SLAYER would want to end its touring career five years after the band's co-founding guitarist, Jeff Hanneman, died from alcohol-related cirrhosis of the liver. Hanneman is credited for writing many of SLAYER's classic songs, including "Angel Of Death" and "South Of Heaven". "I understand," Ian said. "I've been around those guys long enough; I get it. And look, obviously, losing Jeff a couple of years ago, that's something that… as great as it's been, and [Hanneman's replacement] Gary's [Holt] a motherfucker on guitar and there's nobody else that could have filled that role better than Gary Holt, but still, they lost Jeff, and I understand how, after that, certainly for Tom [Araya, bass/vocals] and Kerry [King, guitar], nothing will ever be the same. I can understand that they were able to come to what was obviously a very tough decision to say, 'All right. Let's put an ending on this.' And you know what? All the best things have a great ending, whether it's a book, a movie, a TV series. If you don't stick the ending, it's almost like what was the point in the first place? And I like the way they're doing this and I really think they're gonna go out in a big way and really stick the ending."

Ian believes that SLAYER is making the right decision by going out on top and not just hanging around way past its expiration date. "It's the way you've gotta do it — especially being in a band," Scott said. "People ask me all the time, 'How long can you do this for?' and I'm, like, 'I can do it for as long as I feel like I'm giving everything I have every night.' The last thing I want is being on stage and not being able to perfom at what I consider to be my level of performance, let's say. I never wanna be on stage and someone in the audience can look at me and say, 'Oh, man. He's phoning it in,' or, 'He doesn't even move around anymore.' I would hate to ever disappoint anyone in that way. Playing live for me, being on a stage is that sacred ground, man. That's such a privilege to be there in front of an audience, and for me, if I can't give what I feel like I need to give, then I shouldn't do it anymore."

ANTHRAX will release its long-awaited live-in-concert DVD, "Kings Among Scotland", on April 27 via Megaforce. The DVD is preceded by ANTHRAX's North American co-headline tour with KILLSWITCH ENGAGE — "KillThrax 2018" — which kicked off January 25 in Montreal. 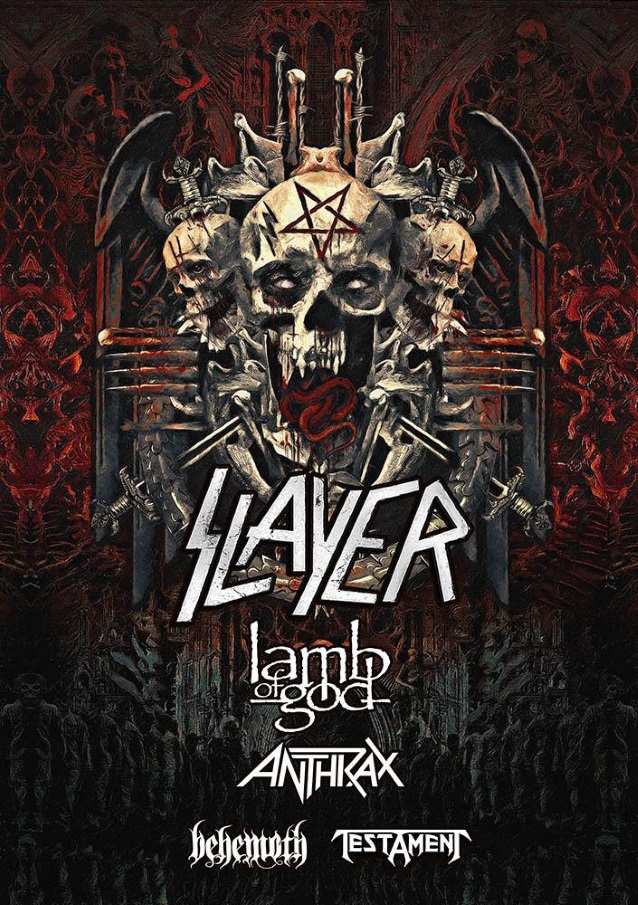