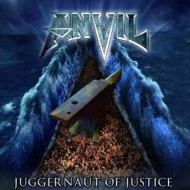 "FukenEh!", a brand new song from Canadian metal legends ANVIL, can be streamed in the YouTube clip below. The track comes off the band's new album, "Juggernaut Of Justice" on May 10 via The End Records. The CD was recorded at Dave Grohl's (NIRVANA, FOO FIGHTERS) Studio 606 in Northridge, California with famed producer Bob Marlette (BLACK SABBATH, AIRBOURNE, FILTER, ATREYU, ALICE COOPER). A special-edition two-song single featuring the tracks "Juggernaut Of Justice" and "FukenEh!" was made available on April 19 at select indie retail stores.

The iTunes version of "Juggernaut Of Justice" contains a bonus track, "What I Want To Be".

Audio samples of all the songs that appear on "Juggernaut Of Justice" can be heard at iTunes.

ANVIL threw an intimate, invite-only advance listening party for "Juggernaut Of Justice", at Toronto, Ontario's new Noble Street Studios during the Canadian Music Week. Several press outlets were given the chance to listen to the CD in its entirety in the studio's state-of-the-art master control room and Hellbound.ca was there to soak it all in, shoot some photos, shoot a couple of quick videos and enjoy a few tasty Steam Whistle beers as well. Check out the report at this location.