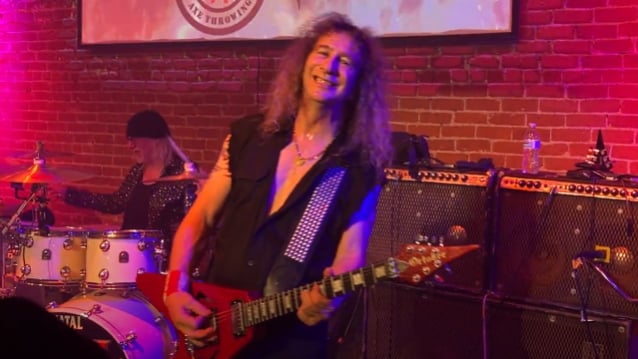 A remastered edition of ANVIL's acclaimed documentary, "Anvil! The Story Of Anvil", received its premiere in conjunction with Beyond Fest on September 22 in Los Angeles at the Saban Theater, where ANVIL also performed, along with appearances from surprise musical guests, including ANTHRAX guitarist Scott Ian. This was followed by a question-and-answer session with ANVIL frontman Steve "Lips" Kudlow and drummer Robb Reiner, producer Rebecca Yeldham and director Sacha Gervasi, moderated by Steve-O from "Jackass".

On the red carpet of the Saban premiere, Kudlow told Buzz about the success of "Anvil! The Story Of Anvil" (as transcribed by BLABBERMOUTH.NET): "My first impression when I was told that they were gonna make a movie, I knew where it was gonna go. Because we had an incredible history and a story to tell, and I'm just the person to fucking do it. So you put those things together, and it's, like, how do you fail? You can't. And that's what I've seen happen. Everything that I predicted [would happen] is going on, and it still is. So it's wonderful. It's a great place to be."

As a result of the movie's far-reaching success, Kudlow and his bandmates "care very much more about our audience — the people who actually buy our records and listen to our music," he said. "Those people and those demographics are incredible because the movie has opened up to a new young generation two or three times now, which is incredible. Yesterday's 10-year-olds are now 20, and yesterday's 20-year-olds are now 40. So it's actually pretty remarkable when you start looking at the different age groups and that we've affected that many generations. It's a lot to be proud of — let's just put it that way."

"This film is pure magic," said Utopia CEO Robert Schwartzman. "As well as being a brilliant filmmaker, Sacha was in the right place at the right time and has managed to bring audiences a truly inspiring film which has stood the test of time."

Added Gervasi: "If you'd told me all those years ago at Sundance, when we had no buyers, that this movie would be released into theaters for the second time 13 years later, I never would have believed you, but here we are. It truly is a miracle. This is all thanks to Robert and his extraordinary team at Utopia. They're brilliant to work with because they're filmmakers themselves, and their support and passion are unmatched. All ANVIL and I can say is thank you!"

This past April, Lips said that he didn't expect the proposed follow-up to "Anvil! The Story Of Anvil" to ever see the light of day. He told Friday 13th Metal: "I don't suspect there will be [another movie], because I think it's a little late on. There's really no point at this point. To a great degree, the people who knew about the movie knew about it, and today it's kind of faded back; it's not as prominent today. That could change. You never know."

As for what he attributed the film's overwhelming success to, Lips said: "It's hard to compete with reality, isn't it? People try to make documentaries, but it's not the same as actually filming things in real time. It's not the same, man. You can do a retrospective and show pictures of the band in the old days and all that — talk about the old days, the old days, the old days — but everybody's seen the old days. What about tomorrow? What are we gonna film tomorrow? What are you doing tomorrow? What do you hope to happen tomorrow? How are you gonna make what's gonna happen tomorrow, put it into motions so we can see it happen? That's what the ANVIL movie did. It's off the hook in that regard. You can't beat the spontaneity. I mean, there's pure spontaneity — as things are going on. You can't make shit like that up."

Back in 2017, Lips said that there was "forty minutes of probably good footage" already shot for a follow-up ANVIL film, but he didn't "really expect anything to ever come of it." He explained: "[Gervasi] paid for that movie ['Anvil! The Story of Anvil'] himself. He doesn't wanna do that again… You never make back all your money. But what it did for his career… like what he did for our career — same thing. He's got a career, and then some. But it's just a question of, will a movie company wanna buy it, wanna finance it? And it's not cheap. It won't be like a blockbuster — it's not gonna cost three hundred million dollars. You're talking about probably less than a million to make a documentary. I don't get paid. Documentary subjects never get paid. I'm not an actor. And it's doing my career such a huge favor, I haven't really got the right to go, 'Hey, why don't you pay me too? You're making the biggest advertising campaign that ever existed? Now why don't you pay me?' It's, like, that doesn't make sense. And he'd say 'no' and I wouldn't get the movie made."

Lips added: "So that's the big question: will there or will there not be? Who knows? I'm not gonna discount it. I'm not gonna say 'no.' I don't know enough. I'm not in that stream of the business, so I really don't know how to answer it. Now, having said that, the ANVIL movie did extraordinarily well, so it would be in their best interest [to finance the movie]. And it's, like, if you guys are lacking stories out there and storytellers and writers, here's something that's a natural, living, breathing fucking story. Why not continue it? You've got an automatic audience from all the people that saw it the first time. So it's got all those positive aspects going for it. But it's just a question of who's gonna open their wallet. [Laughs]"

ANVIL's latest album, "Impact Is Imminent", arrived in May via AFM Records. Like its three predecessors, "Anvil Is Anvil" (2016),"Pounding The Pavement" (2018) and "Legal At Last" (2019),"Impact Is Imminent" was produced by Martin "Mattes" Pfeiffer and Jörg Uken at Uken's Soundlodge studios in Germany.

Co presented by Vidiots, Beyond Fest, 955KLOS and 22ReD who helped put the GREEN in Green Room 😶‍🌫️

Posted by ANVIL! THE STORY OF ANVIL on Saturday, September 24, 2022

Sept 22 goes into the history books as totally legendary..