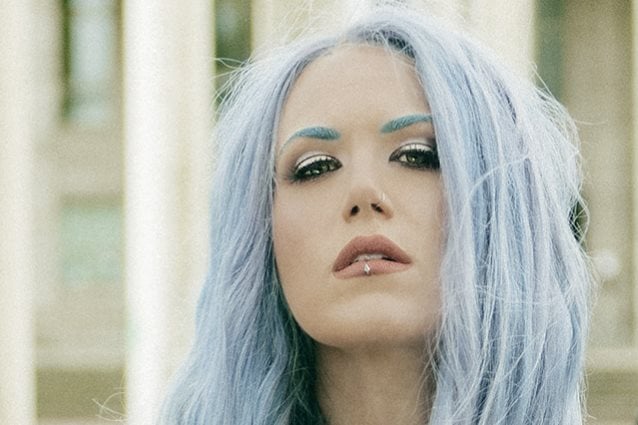 ARCH ENEMY Frontwoman: 'I Can't Wrap My Head Around The Concept Of Death Because I'm Totally Atheist'

On the philosophy behind "Will To Power", the title of ARCH ENEMY's new studio album:

Alissa: "I would just, as cheesy as it sounds, I think a lot about death, life and death. That's one of the reasons I'm vegan. Death terrifies me. I don't want to impose death on anyone else. I don't want to die. I can't wrap my head around the concept of death because I'm totally atheist. There's nothing after life in my head, whether that's right or wrong. For me, my 'will to power' I guess, is just to live a positive life and spread positivity as much as possible to other people and other living beings and hope that with whatever audience I have for my voice, I can actually do some good in the world. It sounds really cheesy, but legit, that's what I think about. I think that can be either through just making someone feel good because they like the sound of our music, or maybe encouraging somebody to go vegan or encouraging somebody to go straight-edge or whatever it is. I get a lot of feedback on those subjects from fans. Every day I get lots of emails and lots of messages from fans saying 'This song saved my life.' And that's really encouraging. I think that really inspires me to keep going for sure."

Michael: "I don't know… I don't really have any ambitions like that. No, I'm just here to entertain people, hopefully make them smile, make them feel something. I've been very lucky. I've achieved most of my goals, really. Beyond my wildest imagination, really. I started off with no ambition other than to play small shows in front of my friends, maybe make a professional demo cassette or something. I didn't have a big dream of playing the big stages. Then it's been step by step, my path just took me in this direction and, of course, now I'm very serious about how ARCH ENEMY has turned into a serious thing. We have employees and it's a big operation. But I didn't really have that ambition to start with. I just kind of fell into it, really."

On whether the band doesn't want to stray from its writing "comfort zone":

Michael: "Of course, this is our tenth album. We're working with a twenty-year history of writing and recording and putting out this music under the banner of ARCH ENEMY. Of course, there is something, I guess, which is a familiar ground; there is a sound. Maybe we have even our own sound at this point. I don't really think that we're experimenting, like going crazy or anything, but I think we're definitely putting in some new elements. We're bringing in some new members sometimes; hopefully no more, but we have Jeff [Loomis, guitar] with us, we have Alissa. Alissa's a big part of putting it all together. Sometimes, to be honest, I'm not developing. I'm not really moving forward, but then I listen to something I did ten years ago, I think 'Wow, that's so different to what I would do now.' Without noticing, I've grown, or I've developed as a player, or as a composer."

Alissa: "I was always very familiar with the entire discography of ARCH ENEMY, prior to when I started writing songs with them, which was the last two albums. I mean, I always sort of write from a place — the starting point for me, is the instrumental song. So I listen to the music and depending on what I feel with that, then I'll start to put together words that I think suit that. Because I know that I'm going to be screaming these words, so I can't talk about boring nothingness. It has to be something I'm passionate about. So, I don't think I really changed my lyrical style that much actually when I started writing with ARCH ENEMY. It was already kind of in line with what ARCH ENEMY talked about anyway. I do think that Mike and I have different ways of writing lyrics and I encourage people when they listen to a song to check out which one of us wrote it, because I think people are confused by that sometimes. I think our writing styles complement each other very well and they work together really well even though they are slightly different."

On whether they keep an eye on the world's events despite being from relatively stable countries like Canada and Sweden:

Michael: "We have friends all over the world, of course. Since many, many years we're always traveling, we've made many friends all over the world. One thing I've learned in working with the heavy metal community worldwide, I can say that I meet people who come from nothing, but we share the same passion and enthusiasm for this music that connects us. I think that's something very emotional, actually, to see people coming from less fortunate places in the world and we can connect with them. Yeah, there are certain things that make me very angry. I always feel like corruption is one of them that I feel very strongly about. It always seems like power corrupts. Somebody starts off as a good politician, then power inevitably corrupts. There's a lot of problems everywhere, it seems, right now. [Laughs] People complain in Sweden a lot, too. I always think, 'What the hell are you complaining about?' I feel sometimes that we're definitely spoiled in Northern Europe with stability of economy and political situations. I have a lot of friends — we all have a lot of friends all over the world, it's something we're very interested in."

Alissa: "I think it's also why we write those songs because we're sort of speaking out on their behalf as much as we can. We don't really write songs only about ourselves. We want people to be able to relate to it. Like Mike said, we have friends all over the world. I have friends I interact with. I've been talking a lot with friends in Iran recently about how heavy metal music is illegal there and the punishment involved for just wanting to listen to this kind of music. There's a lot of freedoms we have that we realize other people don't have. That being said, as someone living in North America, I've only been there a couple of generations. Prior to that, I had family who did live in turmoil. I have those stories and those memories from my grandparents who went through absolute hell. I think that there's something to be said about, I'm not sure what to call this term, what words to use, but 'cause-dilution.' Just when you have so many causes you care about that you think you can't care about all of them enough. I think nowadays especially, I get so many people 'Please can you tweet about this injured dog that needs money for his surgery?' Or 'Please can you tweet about my daughter who has cancer and we need to get money for her for chemotherapy?' 'Please can you re-tweet this organization?' I want to help everyone."

ARCH ENEMY's new album, "Will To Power", was released on September 8 via Century Media. Co-produced by Amott and drummer Daniel Erlandsson, the disc was mixed and mastered by longtime collaborator and friend Jens Bogren (OPETH, AT THE GATES, DIMMU BORGIR). The album's cover artwork was designed by Alex Reisfar.