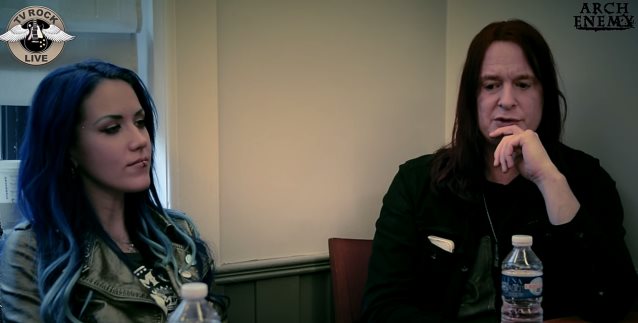 ARCH ENEMY played its first show with Alissa White-Gluz, former singer of THE AGONIST, on May 23 at Turbohalle in Bucharest, Romania. Angela Gossow, who joined ARCH ENEMY in 2000 and made her debut on the now-classic "Wages Of Sin" (2001), has stepped down as frontwoman and will focus on management, while Alissa takes her place.

Asked if ARCH ENEMY considered both male and female singers to replace Angela, or if the band wanted to get another female lead vocalist, Amott told Loudwire: "I get asked that question a lot. I didn't even think about that. Alissa's name came up so quickly, literally in the same meeting when Angela told us. When Angela gave us her final notice, she urged us to continue. She knows how much we love the band, how much it means to us, how much we musically had, and that there's so much life left in this band. She knew all that. She just knew that it wasn't for her anymore. She urged us to continue. She herself suggested Alissa. Alissa's name was just thrown in the mix right from the beginning. We said, yeah, that could possibly work. We knew her as a great singer and a great performer, and really didn't consider anybody else. It all happened very quickly. Alissa, I contacted her, and she was into the idea of coming over to Sweden, just trying it. She liked the idea. We both agreed that she just try this as soon as possible and get in the rehearsal room and jam on the old stuff, see what it sounds like with her voice on ARCH ENEMY's catalog stuff. Also, we wrote some new music together. We jammed on stuff in the studio together when she was over in Sweden. It just all worked out very, very well. We thought Alissa makes a lot of sense on paper, let's try it. It worked out."

"War Eternal" was released on June 10 in North America via Century Media Records. The cover artwork was created by Costin Chioreanu.