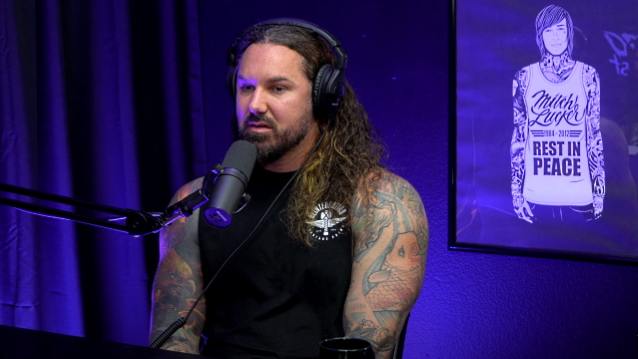 AS I LAY DYING Singer TIM LAMBESIS Reflects On Decision To Hire Hitman To Kill His Ex-Wife: 'I Lost My Way'

AS I LAY DYING frontman Tim Lambesis has reflected on having solicited murder by hiring a hitman in 2013 to try to kill his now-ex-wife.

The now-41-year-old singer was paroled in 2016 after serving two years of a six-year sentence, which followed his early 2014 guilty plea on a felony murder solicitation charge. He has since completed his parole requirements.

Lambesis looked back on his time behind bars in a new interview with "The Garza Podcast", hosted by SUICIDE SILENCE guitarist Chris Garza. He said (as transcribed by BLABBERMOUTH.NET): "My thinking was so isolated in my own mind and disconnected from my support system that I didn't really even fathom or realize how much I had lost myself and the core of who I really was. It's, like, I was this one person for most of my life, and then for this period of time, I had this very isolated, different type of mindset, and then have since returned to being much of who I was in the earlier part of my life plus, of course, the added perspective of everything I went through.

"I don't really know how to describe it. I lost myself, I lost my way, and I sat there in a cell being, like, 'How did I become this person?'" he continued. "It kind of blew my own mind. And as the mental cloud, the fog went away and I could see clearly, there are so obviously a thousand better ways that I could have gone through a divorce or a thousand better ways that if I wanted to be close with my family or if I felt that burning of a father who felt…

"I can talk about, vaguely speaking, any father who loses his children, there's a burning feeling of just, like, 'I'll do anything to fix this or to make this right or to maintain this relationship.' But just 'cause you feel like you would be willing to do anything to maintain what matters to you the most in the world doesn't mean you show that those are your best options. And I saw clearly sitting there thinking in a cell, 'Wow, I could have handled this a thousand different ways,' and the fact that in my mindset I thought at the time this was the best way to handle the situation, it blew my own mind. It's, like, how did I even think that? It just was shocking. And there's really no defense or no way to take away what I did other than that, thankfully, there was actually no true physical harm of any kind."

Lambesis added: "Knowing that I'm relatively young and I have the rest of my life to demonstrate to myself, beyond other people, that that is a very isolated, dark thought process in my life. And if that is an isolated, dark thought process, over the course of 30. 40, 50 years, you'll see that. But I can't prove that to anybody, coming out of prison, like, 'Hey, guys. I'm changed. I'm good.' They have to say, 'Here's who you were for 32 years. Here's this dark period of your life. And here's who you are for the next 20…' I have at least 20 years till most people in this world are willing to be, like, 'You know what? Maybe he really did change. Maybe incarceration really did…' In one of those rare instances where incarceration actually helped an individual; maybe I'm one of those rare cases. But I have 20 years to prove that. So I'm not in a rush other than to be myself and let people see that slowly over time.

"I hate talking about it in any kind of contextual way because I feel like it might come across like I'm giving excuses. I'm not. I'm just telling people the context under which these things happened. That's it."

Lambesis pleaded guilty in February 2014 to hiring a hitman to kill his wife, after telling two people at a Southern California gym the previous year that he wanted to "get rid of her."

His then-wife Meggan had filed for divorce in 2012, citing "irreconcilable differences." The couple has three children, all of whom were adopted from Ethiopia.

Tim at one time has said he considered himself to be a Christian and acknowledged that he found inspiration for lyrical content from biblical texts.

At the time of the musician's sentencing, Lambesis's attorney said the "gym culture" led to "changes in [the singer's] physiological and mental status," with Tim's bodybuilding obsession causing him to go from 170 to 220 pounds after first taking supplements, then steroids. "[He] was not the same person. He was irritable and lost God."

At the sentencing, Meggan said that Tim had become "dangerous" and that she "felt as fragile as a piece of paper that could float away at any moment." She also explained that the day before Tim's arrest, the musician texted her asking for their three adopted children's social security numbers in a display of "tying up loose ends."

Meggan — who reportedly received an e-mail from her husband several months before she filed for divorce telling her that he no longer loved her or believed in God — even referenced the Arnold Schwarzenegger film "Total Recall", where Arnold's character shoots his wife and says, "Consider that a divorce." She went on to describe how she learned that her husband told her in an e-mail that he wanted a divorce. But it never crossed her mind that he would try to hire a hit man to kill her. "I had no idea who I was living with," she said, according to The San Diego Union-Tribune.

Investigators said the undercover cop operation was staged after Lambesis told a man at his gym at Pure Fitness back on April 23, 2013 that he wanted his wife killed. Lambesis was allegedly complaining that she was making life difficult for him, that it was hard for him to see his children and that it was impossible for them to complete their divorce.

AS I LAY DYING recently completed the U.S. and European legs of its 2022 tour. The trek marked the band's first with its new touring lineup, featuring Lambesis and longtime guitarist Phil Sgrosso alongside drummer Nick Pierce (ex-UNEARTH),bassist/vocalist Ryan Neff (MISS MAY I) and guitarist Ken Susi (UNEARTH).