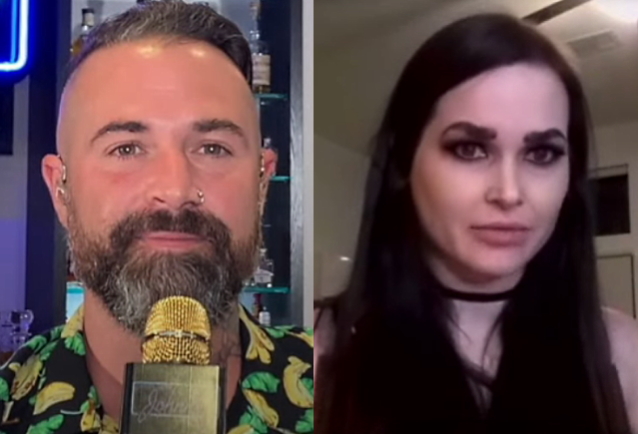 AVENGED SEVENFOLD bassist Johnny Christ is mourning the passing of Niece Waidhofer, a social media influencer and model, who died by suicide. She was 31.

The 37-year-old musician, who hosts an Internet TV show called "Drinks With Johnny", took to his social media on Sunday (June 26) to share the following message: "Last month while filming in Las Vegas, the team here at Drinks With Johnny read a comment stating that friend of the show Niece Waidhoffer had taken her own life. The news came as a shock to us, so we tried to verify the information. After a few days we had learned that sadly, the rumor was indeed true. In the interest of showing our respect to those who knew her best we waited to mention anything about Niece's passing. We have learned in the past few days that news has been brought to light, and we would like to share our deepest condolences to Niece's family, friends and those closest to her.

"I will for many reasons never forget the conversations we had recording an episode with her, and those off the record. I can honestly say I didn't know much about Niece before her coming on the show, and really didn't know what to expect. All I knew was that she was an Instagram model with a huge following, and a fan of my band AVENGED SEVENFOLD.

"Our producer and booker Sam Hawkins shared with me the email chain he had with Niece to schedule the episode, and she was skeptical of Sam's authenticity to say the least. When she realized it wasn't a joke and we would love to have her on the show, it seemed she was excited to share a bit of her story with us. Not knowing anything about the IG modeling world, I was intrigued to learn what made her tick. In that chat I learned many things, but the one thing I took away was that Niece was a smart and beautiful person inside and out. The wit that I had read in her comments to her fans & haters shined brightly as she told the story of how she came to be a model in this new platform. She became a friend as we would keep in touch over the last year plus, checking in on each other along the way.

"We all have struggles in our lives that can feel like it's too much to bear at times. We fight with our own minds sometimes and it's hard to admit when we need help with these battles. Know that you are not alone in this. You are not the only one in this world with problems that seem insurmountable, and there are places to go that can help. There are people in the world that care about you and want to help.

"If you or someone you love is struggling with depression or thoughts of suicide please call the National Suicide Prevention Lifeline at 800-273-TALK. Do not be afraid to ask for help from your doctor or seek out a professional to help you with your thoughts. We all need it sometimes and can always use someone to lean on.

"Niece Waidhoffer will be missed by many including us here. Here's to you, and all those who knew and loved you Niece."

According to TMZ, the body of the model, who had 4.2 million followers on her Instagram, was discovered in her Houston, Texas, home last month after law enforcement received a phone call from a concerned family member who asked officers to check on Waidhofer.

Waidhofer was transparent about her mental health struggles with her Instagram followers.

"She was very open with her followers about her struggles, even wanting to help followers who also suffered," her family told TMZ. "Niece was more than her struggles. She was beautiful and kind, sensitive and funny, creative and talented, generous and compassionate, thoughtful and challenging. While it is so very painful to say goodbye, we take comfort knowing she is reunited with her father, her three grandparents, her Uncle Rusty, and her beloved Puff; and that she is now free to be herself and, finally, at peace."

An online database for Montgomery County in Texas, which is part of the metropolitan Houston area, reportedly indicates that "Deniece Janean Waidhofer" died on May 14.

A nonprofit titled "Peace From Niece" is set to be created in her honor, according to TMZ.