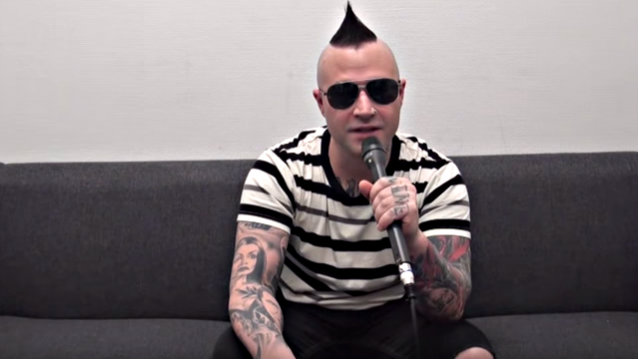 AVENGED SEVENFOLD Bassist On 'The Stage' Surprise Release: People Are Starting To Understand The Album Is Out

Finland's Kaaos TV conducted an interview with AVENGED SEVENFOLD bassist Johnny Christ before the band's March 7 concert at the Hartwall Areena in Helsinki. You can now watch the chat below.

The surprise release of AVENGED SEVENFOLD's latest album, "The Stage", which was announced the night it went on sale, earned the lowest sales of an AVENGED album in 11 years. It sold 76,000 copies in its first week, 73,000 of which were physical.

Christ told Kaaos TV that the band feels good about how "The Stage" release was handled. "I think it was definitely a fun thing for us to try and do," he said. "And now that everything's rolling, I feel like people are… now they're starting to understand that our album is actually out. [Laughs] Yeah, as far as it goes, it was really fun, a cool thing to do. I don't know if we'll try it again — we'll have to wait and see how we're feeling on the next one — but right now, it was definitely… we just wanted to do something different. And any time you can do something different, we definitely try and do that."

AVENGED SEVENFOLD, which just completed a European tour with DISTURBED and CHEVELLE, became the first-ever rock band to drop an unannounced album in both digital and physical form.