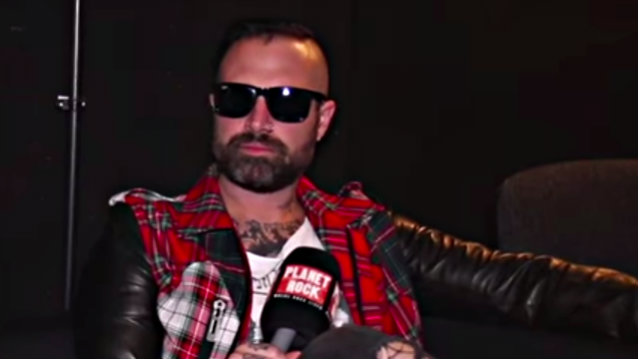 Paul Anthony of Planet Rock conducted an interview with AVENGED SEVENFOLD bassist Johnny Christ at this year's Download festival, which is taking place this weekend at Donington Park in Leicestershire, England. You can now watch the chat below.

Asked how the members of AVENGED SEVENFOLD know it's time to start working on material for a new album, Christ said: "You start to feel it in the cycle [for the previous album], when you're starting to play the songs. And right when everyone starts to get your new songs, then you know you've gotta make a new record. 'Cause once they know the words to every song… You come out with a new record, and the first few shows, everyone's, like… they know the songs, but they don't know it as well as the other tracks. And then as the cycle starts to go on, and they really start to know the new tracks, you're, like, 'All right. It's starting to be about that time.' So you go back out and by the time you come back, you're playing new stuff, and then they're really wanting the old stuff [laughs] — stuff from the previous record."

He continued: "For me, it's a lot of that. It's a lot of just knowing when you're out and starting to feel inspired. When we're out on the road, there comes a time when you're just, like, 'Okay. I'm ready to write a new record. I'm not spent anymore.' 'Cause we try to spend every last bit of our flow on the record, everything that we've got, and then we're, like,' All right. That's it for a while.' And then we'll get back into it. So I feel like we're getting on the close side. We'll probably start writing sometime at the end of this year."