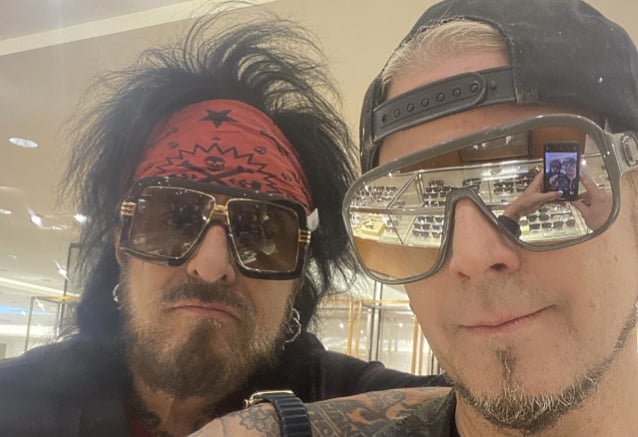 MÖTLEY CRÜE's Nikki Sixx has praised the band's new guitarist John 5, saying he "checks all the boxes" as Mick Mars's replacement following the latter's decision to no longer tour with the legendary rock act.

Sixx commented on John 5's addition to CRÜE while answering fan questions on Twitter on Friday (October 28). Asked why the band chose John 5, who is one of the credited co-writers on the three original songs on CRÜE's "The Dirt" soundtrack, Sixx said: "He checks all the boxes. He's a insane player. Has respect for our music, is funny as fuck and has history with us and we've written some pretty big hits together."

John 5 said: "I'm honored to carry on Mick's legacy and am looking forward to playing these songs."

Back in 2013, Neil said that Mars's battle with ankylosing spondylitis as well as the band's desire to "go out on top" were the primary reasons for CRÜE's decision to call it quits after 2015. "It's just time," Neil said nearly a decade ago. "Mick's health is not that good, and touring is tough on him. I'm sure in five, 10 years' time, we'll probably do something together again, but it's not gonna be like a KISS farewell to the farewell to the farewell tour. We're not gonna be like that."

Lee echoed Vince's comments at the time, telling Canadian progressive-house music producer and performer Deadmau5 in a video: "Our guitar player, Mick, he has a spinal disease that's slowly fusing his vertebrae together. It's one of those things that's treatable, but not curable. So it's just progressively getting really worse and it's painful for him, so he doesn't wanna tour much longer. I can't say I blame him… The last thing we ever wanna do is go out running on two cylinders with some hired guy playing guitar; that's just wack. So we wanna go out with one big hurrah with the original guys and be done with it."

However, in an October 2013 tweet, Mars painted a different picture, claiming that his medical condition had never affected his playing. "Once again, any rumors regarding a farewell tour due to 'my poor health is BS," he wrote. "I am doing fine, my AS has never kept me from touring." He added: "Thank all of you for knowing the truth… When I'm done touring, you'll hear it from me."

Mars has struggled with Ankylosing spondylitis since his late teens and spoke about his first experiences with it in CRÜE's 2001 biography "The Dirt".

Last week, it was announced that MÖTLEY CRÜE and DEF LEPPARD will go global in 2023 with their co-headline "The World Tour". Produced by Live Nation, the trek will kick off on February 18, 2023 at Foro Sol in Mexico City and include stops throughout Latin America before heading to Europe in May 2023.

He checks all the boxes. He’s a insane player. Has respect for our music, is funny as fuck and has history with us and we’ve written some pretty big hits together.

He’s been a soldier along with us for 4 decades.We will continue to carrying our legacy to Generations of fans and honor Micks request for us to keep touring as Motley Crue.