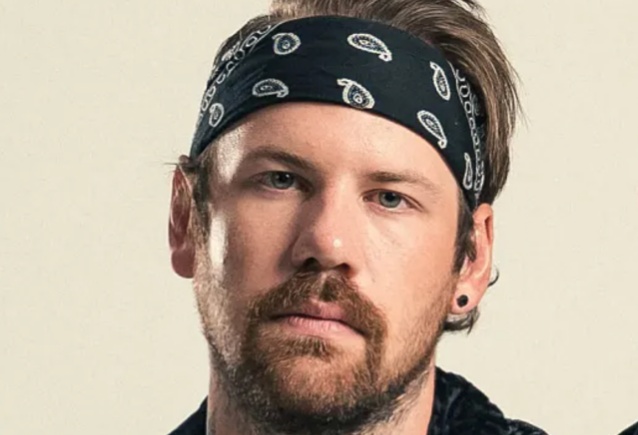 In a recent interview with RadioactiveMike Z, host of the 96.7 KCAL-FM radio program "Wired In The Empire", BEARTOOTH singer Caleb Shomo was asked to name the first METALLICA song he learned to play on guitar. He responded (as transcribed by BLABBERMOUTH.NET): "Probably 'Enter Sandman'. I'm just guessing. I know a lot of METALLICA, but if I had to bet, I would probably say 'Sandman'. I mean, that song has just changed by life, it changed the world. That is still one of the heaviest riffs of all time. Pretty amazing."

Regarding how he first got introduced to METALLICA's music, Caleb said: "It was a little bit later in life, actually, surprisingly enough. I'd always had an affinity for classic rock and been a big fan of that, but then when I started getting more into heavy metal, obviously, METALLICA was, like, if you're gonna get into metal, this is what it's about. Yeah, the 'Black Album' is just a riff-heavy record of nothing but bangers and, yeah, 'Sandman' is one crazy way to kick it off."

Shomo went on to pick "Blackened" as the METALLICA song to be played on the show, stating about his choice: "That riff is just so rad, and that song just absolutely rips. I love every part of it. So, for me, that's the one I've gotta pick."

Asked if the "lack of bass" on METALLICA's 1988 album "…And Justice For All" bothers him when he is listening to it, Caleb said: "Not really. To me, that's not what I'm focusing on. I'm just focusing on the guitars — the guitars and the vocals. And obviously, no offense to the bass — that is a very integral part — but I really never even thought about that. It's just for that record, my brain is revolving around the guitar riffs. I still think that record sounds incredibly heavy and unique, and that just kind of puts a little time stamp on it."

BEARTOOTH has just released the deluxe edition of its critically acclaimed 2021 album "Below". "Below Deluxe" is expanded to include 32 tracks. For this edition, BEARTOOTH added two new bonus tracks, "Fighting Back" and "Permanently Sealed", as well as a refreshed version of current radio single "Skin (Alternate Universe Version)", which mixes acoustics and electrics. It also includes the full, 17-track live recordings from the "Live From The Journey Below" livestream, recorded at the historic Clyde Theatre in Fort Wayne, Indiana in July 2021. An exclusive 52-track "Special Video Edition" Apple eMix bundle includes all the official videos plus the videos from "Live From The Journey Below".