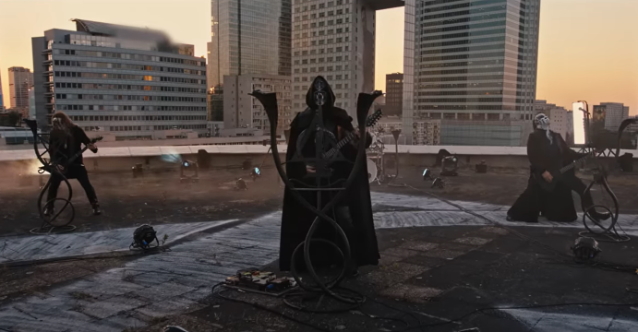 BEHEMOTH's leader and artistic alchemist Adam 'Nergal' Darski told Rock Sound about the band's decision to film the event on the Palace Of Culture And Science: "We were trying to do something big around the release date. And I've been talking about that for months and months, [throwing around] different ideas. We even had an idea to go and perform somewhere in Kyiv, Ukraine. Yeah, we were actually making contacts with some productions out there. We were thinking, not only we can just make an artistic statement but we can also make a very important political statement.

"I use my platforms," he continued. "I use the stage and in interviews [I take the opportunity] to mention things that I consider very relevant and righteous. So we were thinking, 'Maybe we should fucking go to Kyiv and do it on top of some building. Maybe if there's a bombing, we should fucking go underground, like U2 did' — Bono and Edge, they performed in a metro, underground. And we were just bouncing back all those ideas. But eventually we ended up [deciding to do it in Warsaw because it made more sense] logistically, economically… even though it was still fucking pricey."

He added: "I really hope that people will pay attention and will click on that and people will appreciate all the effort that we put and invested. And, of course, it's free of charge; we're just giving you something extra around the record, just to build hype about the record and also hype for the upcoming European and South American tours."

Nergal recently admitted to Australia's Wall Of Sound that he was feeling a degree of trepidation and repetition before the release of this new album.

"I deeply hope that people will dig this new album. Of course, it's the twelfth record; I've been there and done that.

"I have no problems talking freely to people about music, about the content, about everything — I've learned that to perfection, really," he added. "A lot of that stuff is repetitive, okay? So don't get me wrong — I don't want to sound like I'm a bored musician talking to another interviewer; every interview is always different. It's like having sex with multiple partners — every time is different. But you need interaction, you need a fanbase, you need a following, you need a reaction from the people for this — and it's worse and worse to get that these days."