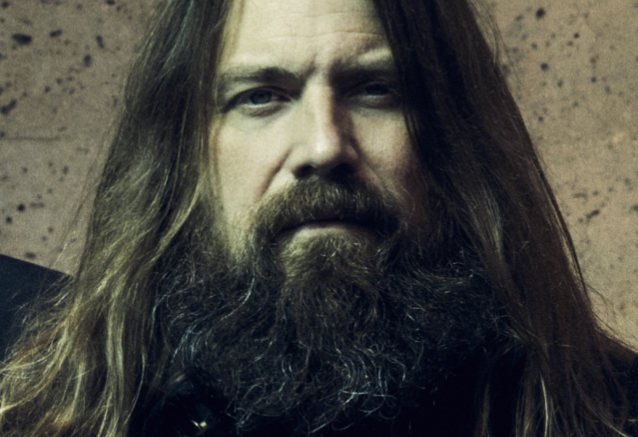 MARK MORTON: Why LAMB OF GOD Decided To Document Making Of 'Omens' Album

Richmond, Virginia metallers LAMB OF GOD recently announced "The Making Of: Omens", a short film documenting the recording of their upcoming album. The documentary will premiere with a livestream event on October 6 and be available to watch on-demand throughout the month of October at watch.lamb-of-god.com.

All physical CD and vinyl copies of "Omens" will include a free access code to watch the documentary, and fans who pre-order through shop.lamb-of-god.com will also receive their code via email before October 6. Standalone livestream and video-on-demand tickets will go on-sale September 22.

The documentary will include four full-song performances recorded in the live room at Henson Studios: "Nevermore", "Omens", "Vanishing" and "Gomorrah".

Speaking to the WSOU 89.5 FM radio station about LAMB OF GOD's decision to document the making of "Omens", guitarist Mark Morton said (as transcribed by BLABBERMOUTH.NET): "It started, really, because we knew the way we were gonna record it — we knew we were gonna be all together [in the studio recording at the same time]. I don't know if the average music listener pays attention to that kind of thing, but it's not really a very common way to make a record these days. To be all playing at the same time and recording every piece of it at the same time and saving parts of each performance, that's the way things used to be done, but very rarely are they done like that. So I think we felt internally it would be cool to document that process, knowing we were gonna be doing it that way. And also there's just a history of behind-the-scenes documentary within LAMB OF GOD, just historically. Back in 2000s, DVD days, we were really open with having cameras around and filming ourselves for better or worse and kind of letting our fans see what it's like every step of the way, really — sometimes to a fault. And I think that access is really early in what kind of helped create such a bond between us and a lot of our fans is because they feel like they know us because they've been given so much access. So it had been some time since we'd done anything like that, but deciding to do so felt pretty natural."

Last month, LAMB OF GOD bassist John Campbell told Germany's EMP that "Omens" is "a fairly dynamic record. There's a few other little surprises and tweaks and things to come in October," he said. "But we recorded it differently this time. We went to Los Angeles and all of us in the same room and same time recording, which gave us some leeway to make changes as things happened and just kind of feel it out in a different way than we've done in the past, which would be everybody kind of going in their corner recording and it gets assembled later. So it was a real team effort on this one, in the recording — all the way through it's been a team effort — and in the recording especially, when we were all in the same room doing that stuff, it was great. I got to spend three and a half weeks working on a record instead of four or five days — working on the recording of the record."