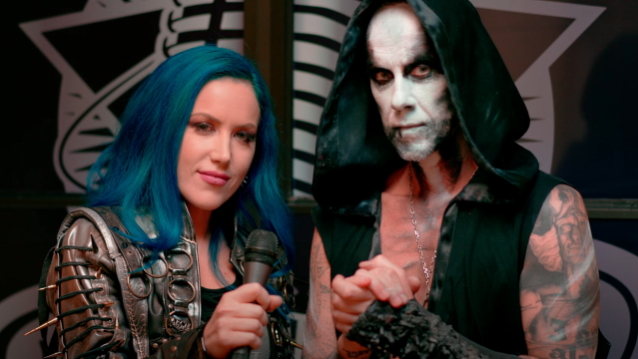 During an appearance on a recent episode of the "Hardcore Humanism With Dr. Mike" podcast, Adam "Nergal" Darski of Polish extreme metallers BEHEMOTH spoke with clinical psychologist and life coach Dr. Mike Friedman about the importance of women's rights and gender equality.

"Hardly anyone in the metal scene talks about women's rights," Nergal said. "I know it's a chauvinistic genre, and even talented and beautiful women that are very successful, they get a lot of shit from men, or are not being treated equal, which is absolutely wrong, because some of those women… Like for example, Alissa [White-Gluz] from ARCH ENEMY that we've just toured with, she's got bigger balls than most of metalheads that I know and I've met and she's probably even stronger and braver than I am, being a man.

"Women's rights, what just happened in the U.S. a few weeks ago, and Poland, and abortion laws and stuff… If you are open-minded and if you're about equality — you don't need to be socialist to think that way — but women deserve their rights, same as men," Nergal continued. "And it still feels like there's a massive imbalance in between.

"Yeah, we should really speak up and talk about it and be vocal about it, because it's very important," Nergal added.

Back in January 2021, Nergal blasted the Polish government's near-total ban on abortion, saying the country was "moving back to the obscure, scary, medieval past."

In October 2020, the predominantly Catholic nation's Constitutional Court ruled to ban terminations of pregnancies with fetal defects. Abortion is now only permitted in cases of rape or incest, or when the mother's health or life is in danger.

Last month, the Polish newspaper Rzeczpospolita reported that the number of legal abortions in Poland fell by 90% in the year after the landmark court ruling. 107 legal abortions were recorded in the country of more than 40 million people in 2021, compared to 1,076 the year before.

In June, the U.S. Supreme Court ended the federal right to abortion and left states to regulate the service.