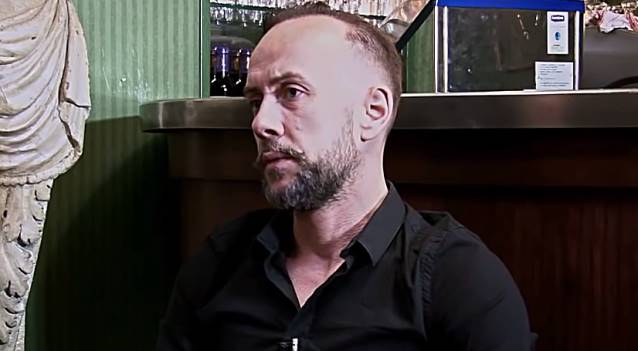 BEHEMOTH's NERGAL: 'Most Of The Music That Is Offered By So-Called Extreme Metal Bands Is Not Extreme'

Kim Kelly of The Quietus recently conducted an interview with vocalist/guitarist Adam "Nergal" Darski of Polish extreme metallers BEHEMOTH. A couple of excerpts from the chat follow below.

On BEHEMOTH's tenth album, "The Satanist":

Nergal: "You probably talk to artists every day that say, 'Yeah, this album is our best, so on so on,' so I'm happy to say that I'll be original here, and say that, no, this is not our best record yet, because that's not for me to judge. Some people like 'Demigod' over anything else, some say 'Evangelion' was our best, but people have their own opinions. To me, the bottom line is that 'The Satanist' is the most sincere record we've ever done. It's a very organic and very natural album in many ways, and it's also super dangerous. It's probably the album that we're the most satisfied with, which is a unique feat for most artists; usually they're unsatisfied with themselves. It may be an oxymoron or whatever, but you're actually talking to a happy artist here! It's a great record. I love it. It's not arrogance, it's passion and it's love for my own creation and a full acceptance of who we are in our nature."

On how "The Satanist" compares to other albums in the extreme metal genre:

Nergal: "One of the factors that makes this record so different, and also I really hope it's something that distances our new record from the majority of extreme metal albums in the market these days, is that most of the music that is offered by so-called extreme metal bands is not extreme. The paradox is that the average extreme metal band these days is just another friendly band, which actually pisses me off, because that's not how 'extreme metal' — black metal, death metal — was meant to be. This is why I don't listen to them. If I want to listen to some extreme metal, I go to the niche of the genre where bands don't give a fuck because there's no money and no business involved, there is no compromise. I'm very much inspired by bands that don't give a fuck, so you could also call 'The Satanist' an 'I don't give a fuck' album! What I'm missing with these 'extreme metal' bands is the danger factor in these bands; they try to be friends with everyone, they play blasts all over the place, playing blasts for 45 minutes is just dull, it's boring. 'The Satanist' is about dynamics, and it's a very diverse record. On one hand, you can say that it's totally the most sinister album that we've ever put out, but at the same time, it's flirting with genres. There's a lot of traditional stuff going on, there's classical hard rock, you can hear it in the leads and some of the riffing and the grooves. It's not a typical death metal record. I like to think of this album as something very unique. So on one hand, yes, we are part of the genre, we are an integral part of the black metal tradition, and we know where we come from, we have so much respect for our roots, but on the other hand, it's more than that..."

On the five-month bout of leukemia he overcame in January 2011, after receiving a bone-marrow transplant:

Nergal: "I've literally overcome death. I conquered it and I'm happy to sing about that which other bands can only imagine. For them it's all just speculation, but I've actually been there and experienced death, and I hope I'm not going back anytime soon. But, I definitely wanted to share this energy on the new record, because it's very honest. There's no bullshit there. Don't get me wrong, I'm not saying other bands are bullshit; you can be a poet without graduating university. The whole 'The Satanist' concept is all about combining these contrary values that to me complete the picture, and they can coexist. You ask me if I worship death, nowadays it's obvious to me that I do, because as much as I worship death, I appreciate and celebrate life, and one cannot exist without the other. I won't be just worshipping death just to elevate my black metal aesthetic. I really hope that I collect a lot of experience and sow it into the music and make BEHEMOTH's music more honest. My whole experience just made me be even more honest with the world. We can use fake names and masks and stuff, but somehow it made me feel like I have nothing to hide anymore. Even with all the wardrobe and imagery around the band that is sinister, eerie, and evil, we definitely stand behind what we represent, but to me there's no contradiction in entering the stage, and when I get into the song 'Conquer All', saying 'It feels great to be alive!'"

On enjoying a level of mainstream celebrity in Poland:

Nergal: "I want to go beyond this heavy metal genre. I know there's kids that get confused when they see a guy that they look up to and who wears makeup and is this and that in videos and see him in 'The Voice Of Poland' jury or in the movie I've just started which was a comedy about Nazis called 'Abassada' (it was all over cinemas here, and I was one of the main characters),and they may get confused but that's what I'm all about, confusing people. If they want to define me and have me for themselves, they can sleep well because they will never have that. I won't be defined. I believe in the fact that human beings are hypercomplex individuals. The fact that I'm a heavy metal musician doesn't make me go this one and only way; I'm there to be on this path and simultaneously be beyond it. I dwell in several different dimensions, some of them may look weird to you, some may seem to exclude one another, but for me, they do not. To me they complete the full picture of complexity that is this duality of my nature."

Read the entire interview at The Quietus.