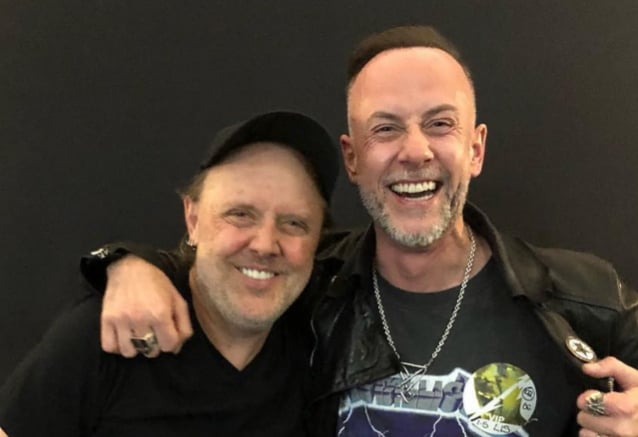 In a new interview with Sweden's Rock Sverige, BEHEMOTH frontman Adam "Nergal" Darski was asked what METALLICA has meant to him throughout the years. He responded: "Fucking hell, man. I mean, I remember when I was a kid, I wasn't the biggest METALLICA fan. I was more of a [IRON] MAIDEN fan and SODOM or something else. I always followed METALLICA and I listened to them, but surprisingly, which is quite unexpected, I became the biggest METALLICA fan for the last 15 years. The longer I'm around and the longer I see METALLICA going and how well they're doing, I'm more and more filled with fucking adoration for those guys. I'm lucky enough to be friends with Lars [Ulrich, METALLICA drummer] and he's an amazing human being — super gentle and an amazing guy. And every time I see METALLICA… most of the times I'm in the pit and that's amazing.

"I think the last record [2016's 'Hardwired… To Self-Destruct'] is really a solid one," he continued. "'Spit Out The Bone' must be one of their best songs ever. I'm one of those guys. 'Kill 'Em All' is probably one of my favorites and 'Master Of Puppets' and the last one. It's a great record.

"I always say that METALLICA is still around and they're in really good shape," Nergal added. "They're not the youngest dudes around and I believe that they'll go on for at least another decade, but I always tell everyone to fucking go and watch METALLICA. Go and see METALLICA because all those classic bands like METALLICA, MAIDEN, GUNS N' ROSES… all those bands are going to be around for only a little bit longer. It's going to be the longest farewell. Make sure to catch their set and support those bands. Once they're gone, they're gone. Appreciate them while their still around and touring the world. I always go and see METALLICA, MAIDEN, GUNS N' ROSES…"

Back in August 2017, Nergal shared a backstage photo of him with Ulrich, METALLICA frontman James Hetfield and Metal Blade Records founder Brian Slagel taken before the band's concert in San Diego. At the time, he wrote about the experience of meeting Ulrich and Hetfield: "We are entering the backstage rooms... Lars is hanging out there with a cup of coffee. He's relaxed and totally cool. Super friendly, focused on YOU what makes you feel important. I like that. When we start talking families I'm asking if his son is into metal at all. Noooo, he's a jazz kind of guy, he studies in NYC. Then I go: Well, if's he's a jazz kind of person do you hear him often saying to you: NOT QUITE MY TEMPO!!!! We start laughing... James Hetfield joins the conversation. We briefly talk about GOJIRA, who open for them that nite. We make this picture and say good bye... few hours later METALLICA enters the stage in San Diego SOLD OUT 40.000 stadium and AGAIN plays a show that proves they ARE #1 band on the planet. We are right in the centre of snake pit and the band is literally at hand! I'm left speechless. One of the happiest day of my life."

We are on our way down to San Diego to see Metallica last night. I'm harassing his ass to tell us the stories how we met...