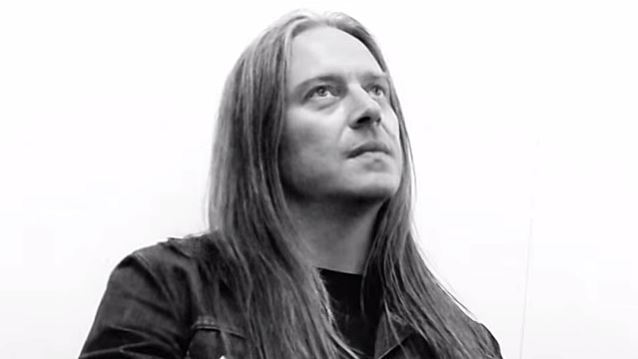 On July 19, ResidentRockStar.com conducted an interview with guitarist Bill Steer of British extreme metal pioneers CARCASS in Denver, Colorado. You can now watch the chat below.

Asked if CARCASS fans can expect to see the follow-up to the band's "Surgical Steel" album (2013) anytime soon, Steer said: "Definitely not, 'cause we're still touring. It's just there was no way we could do it. I think some of us in the band really wanted to get stuck into that last year, but not everyone felt the same way, and I think in Jeff's [Walker, bass/vocals] mind, we need to be touring up until the end of this year, and then maybe we can, you know, slow down. 'Cause there's no way we can make a record while we're on the road. I mean, it's just not possible. It's not that kind of music."

Steer also talked about the CARCASS songwriting process and how it has evolved over the years. He said: "When we get together and do our CARCASS thing, I guess it's a very similar pool of influences we're drawing from that we were drawing from back on album No. 3, [1991's] 'Necroticism', and that's a whole spread of things. Like the very early death metal — that stuff which we still revere — and a band like SLAYER, obviously, and MERCYFUL FATE and KING DIAMOND. There's the whole New Wave Of British Heavy Metal era, which I'm a big fan of. I like a whole load of '70s hard rock, but I'm quite careful about how much of that feel I bring into the band, 'cause there's a limit to how far you can push that element. And we just do what feels right, I guess. That's how we worked on 'Surgical'; we just kind of went into the rehearsal room every day with a load of riffs and bashed things around, and if something felt good, we just ran with it."