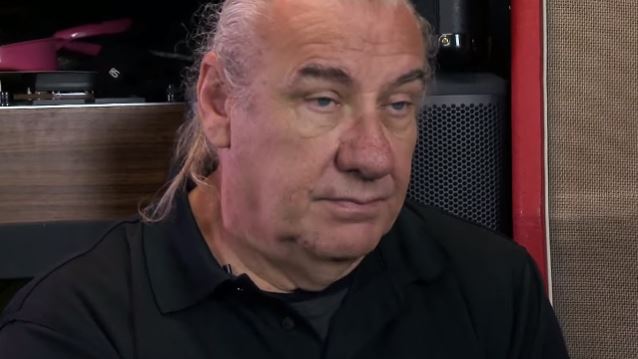 BILL WARD: 'I'm Quite Clear About What It Is That I Need In Order For Me To Perform In BLACK SABBATH'

In a brand new interview with Bob Nalbandian of the "Shockwaves" podcast (download m4a audio file at this location),original BLACK SABBATH drummer Bill Ward was asked what message he had for the band's fans who have followed the recent war of words between Bill and his bandmates, especially singer Ozzy Osbourne, and who are upset that Ward is not taking part in SABBATH's current reunion.

"I know that I've had to make some controversial moves, which I know that a lot of people don't like, a lot of fans don't like," Ward said. "And they're saying, 'Why can't Bill just show up and play?' I don't expect them to understand why I've had to take the actions [that I took]. I think had they walked a mile in my shoes, or even half, or even a third of a mile in my shoes, perhaps they would have a better understanding of why I've had to come to the decisions that I've made."

He continued: "I'm quite clear about what it is that I need in order for me to perform in BLACK SABBATH, and I've made it very clear to every single person; it's about as clear as day can get.

"If I get to say anything, I would reach out to the fans' hearts and say it's not my intention to hurt anybody or cause you dismay or to break your hearts. I've got a broken heart, too, in all this. It's not that I want to purposely, or deliberately, hurt you or create anguish or anything else. I know there's a lot of people that have been very depressed and upset. And all the Ozzy fans think that Bill Ward sucks, and some of the Bill Ward fans think that Ozzy sucks. And it's terrible having that kind of a division throughout. And, you know, I welcome all the Ozzy fans. They can think that I suck, if they want, but I still love them just the same. My heart's got enough love in it to know that, it's okay, guys. I can really appreciate that you're really upset."

Ward insisted in a recent interview with Rolling Stone that he is "quite capable" of playing a full concert with BLACK SABBATH, despite the bandmembers themselves saying the opposite. Ward stepped away from the SABBATH reunion in early 2012, while the group hinted that he was not in good enough physical shape to either record or tour.

After posting an open letter on Facebook in which he demanded that Ozzy apologize for some of those remarks, Ward was asked by Rolling Stone if he could physically play a complete SABBATH concert right now. Ward replied: "Absolutely, yeah. I have no doubt in my mind. I know that they've suggested that I played half the gig, and I don't want to play half the gig. I'm quite capable of playing a complete fucking BLACK SABBATH set."

Ward added, "It's true that I have heart disease, and it's true that I did get sick a couple of years after the fact. But when the health card is being thrown around, the bottom line is that I really tried to take care of myself… I'm much harder on me than those guys could ever be."

Addressing Ozzy's claim that he was "incredibly overweight," Ward responded, "The truth is that I was overweight for playing onstage, but I wasn't overweight for the studio. I could cut tracks with the weight that I arrived at. All of those guys know that I have a really rigorous exercise regimen."

Ward revealed his terms for a "signable" contract with SABBATH, telling Rolling Stone magazine: "I wanted to earn some better money than we had been (paid) in the past for festival gigs. I think it was somewhere like $80,000 for the festivals, which I can hear everybody gasp now, but $80,000 is not a lot of dough when you're playing festivals."

Ozzy responded to Ward's letter last month, saying, "Bill, stop this smokescreen about an 'unsignable contract' and let's be honest. Deep down inside, you knew you weren't capable of doing the album and a 16-month tour."